According to wikipedia, Grand Forks, population 4,049, is a city in the Grand Forks, population 4,049, is a city in the Boundary Country of the West Kootenay region of British Columbia, Canada. It is located at the confluence of the Granby and Kettle Rivers, a tributary of the Columbia River.  The city is just north of the Canada-United States border and approximately 500 km (310 mi) from Vancouver and 200 km (120 mi) from Kelowna.  The video by CTV about the flood that hit Grand Forks in May of 2018 can be viewed on the following link –

I was awake at 6 am, but I didn’t leave the site until 8 am for a 3 km walk to the city centre.   On my way there I spotted some unique carvings.

When I reached the city centre, I opted to have breakfast at the Wooden Spoon Bistro.   As I was returning to the camp site, I spotted two young deer grazing on someone’s lawn.   It was evident that deer in the area are quite common, because they looked up at me as I walked past them on the sidewalk but they never moved.  They only looked up and watched me a couple of times..

I returned to the campsite in time to relax for a while and change my clothes before going to the Sunday service.    After the service we all ( 13 of us ) went to the ‘ Station Pub ‘ for lunch.   This restaurant is a renovated railroad station and the rail tracks next to the station had been modified into a hiking trail.   After we returned to the campsite, I picked up some gatorade and walked back to the pub and then continued west along the rail trail.  As I looked at the mountain in the distance, I contemplated hiking it to the top, however, I would need a full day to do that.

The trail wound its way up a gradual incline and as I got higher, there were very excellent views of the mountains and valleys. 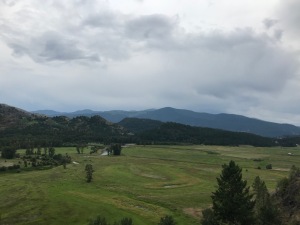 I had walked 7 km when I looked at my watch and noticed that I needed to start back so that I wouldn’t be late for supper.   When I checked the ‘ Altitude ‘ app on my phone I noticed that I had gradually climbed up 90 m ( 300 ft ).

Eileen had warmed up and enhanced some leftover food for supper.

By 6:30 all of the short term volunteers had arrived and we had our orientation meeting.  When the last volunteer arrives tomorrow, we will have 17 people at the site ( 19 including Peter & Susan, who will be leaving after Wednesday ).  After the meeting myself and the other crew leaders ( Sam, Cole and Justin ) met with Ike and Peter Thiessen to review the jobs for the week, after which we could relax for the rest of the evening.   I returned to my room to complete most of my journal and make some preparations for the week before I went to bed.