On the weekends, everyone is on their own for meals and activities, however, we have been doing a few things together.     After I got up, I made myself a couple of soft boiled eggs and some ginger tee which I ate while I edited my journal for Saturday.    At 9:15, I was almost finished with my journal, when Cole mentioned to me that he was going to the Baptist church and asked me if I wanted to come along.   Since the service started at 9:30, I stopped what I was doing and went with Cole and Justin to the Baptist church.   A few volunteers went to the River Valley church service and the rest went to the Gospel Chapel.

It was a small baptist church with few members, but the people were very friendly and dedicated to their church.   After church we returned to camp before heading to the Happy 50th diner for lunch with the rest of the group.

When we got back to camp, we had a short meeting and then we had ice cream for dessert.   Some of the volunteers went to a local board game establishment where you each pay $5 and play any of the board games that are available while the rest of us relaxed for the remainder of the afternoon.The 3 young ladies from Pennsylvania had gone to Banff for the weekend and had planned to return in the evening.

At 5:30 we met for supper and by 6 pm all of the short term volunteers had arrived.    Shortly after we had finished our orientation meeting, the ladies returned from their weekend in Banff.

Some of the volunteers were originally from Paraguay and after dinner they sat outside with Ernie and drank Yerba Mate.   They pointed out to me that the Brazilian Mate wasn’t as good as the Paraguayan Mate and I couldn’t argue with them because I don’t drink it.   However, I did suggest to them that they might be addicted to this highly caffeinated drink, but that wasn’t about to stop them from drinking it.

In the evening I received the group picture of the volunteers from the previous week. 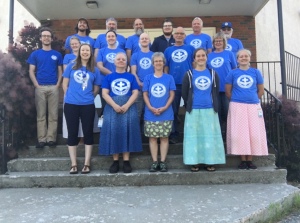 The volunteers during last week from left to right are: