I woke up at 6 am, packed my things and checked out of the hotel.  The temperature was 16 C ( 61 F ) when I woke up but it quickly warmed up to 22 C ( 72 F ) and stayed there for the remainder of my day, however, it seemed much warmer when the sun peaked through the clouds.

From the hotel I drove to a nearby Panera Bread franchise for breakfast.  I like to try something different once in a while so I ordered a Chipotle Chicken & Avoacdo Breakfast Wrap, a bear claw pastry and my second cup of coffee this week.    As always, it was all fresh and tasted very good.

I relaxed while I ate, played a game of Sudoku and then I leisurely made my  way back to the car to continue my journey.   I drove north on the 2, until I reached a junction where I turned on to the 395 to Grand Forks.

I always enjoy driving through the mountains.  The farms and grasslands  in the valleys, surrounded by the mountains, make spectacular views.   Unfortunately my camera never captures the scenes as well as my eyes , however, as you can see from the picture below, the traffic was light, which made for a very relaxed drive.

It wasn’t long before I reached the Canadian border and just before I crossed, I topped up my car with gas. 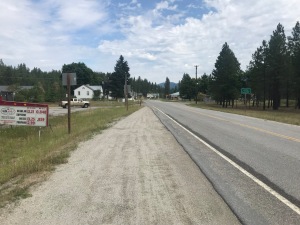 There was only one car ahead of me when I approached the border guard.   He had a few simple questions and then sent me on my way. 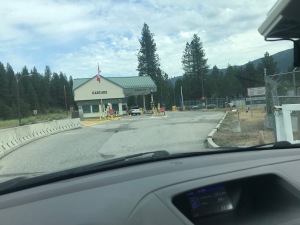 As soon as I drove from the booth, the signs for Canada loomed in front of me.   There was a sign for the conversion of speed limits to metric, as well as road weight limitations and a warning against bringing in invasive species.   There are inspection stations for boaters all through Montana, Idaho and Washington to make sure that no invasive species would be transferred into these states and British Columbia has similar laws.

From the border it was only 20 km ( 12 mi ) to the project site at the River Valley Community Church building in Grand Forks.    The project is using the an area in the back of the church, as well as, the basement for offices, sleeping accommodations and dining facilities.   The pastor’s wife is the person who suggested that MDS use the church building as a project site.

I met Abby, the office manager, who showed me the site and then I unpacked my car and settled into my room.

Once I had finished arranged everything in my room, I sat outside in a lawn chair and started my journal for the day, while listening to the rumble of thunder on the other side of the mountain.

By mid-afternoon, the project director, Ike Epp, asked me if I wanted to see the projects that are being worked on, so I drove around with him to each of the sites.  Before we left, we spotted a deer between the two MDS trailers and on our way back, we spotted more deer.   I was told that Mountain sheep can occasionally be spotted on the nearby mountainside.

When we got back, I relaxed for a while and then had some dinner and did a load of laundry.   In the evening, I met with the Project Coordinator, Peter & Susan Thiessen and most of the long term workers.

It a liesurely 2 hour trip from Spokane to Grand Forks.

The entire trip to Grand Forks took 54 hours of driving in just over 7 days.