It was Saturday morning and we were on our own for our meals, so Evelyn and I decided to help stimulate the local economy and go to the ‘ Wooden Spoon ‘ restaurant for breakfast.  I had my standard 16 oz Cappuccino with my breakfast, however, she opted for a non-standard ‘ beetroot latte’  ‘.

When we returned to camp,  Sam, Justin and Jon had driven to Osoyoos for the day and I helped Ike and Peter move some equipment and trailers before lunch.   We made lunch from the leftovers from the previous week and then Peter, Susan, Evelyn and Vanessa went to Christina lake for the afternoon, while Ike, Gordon and I went to the Son Ranch Timber company museum.

I had a hard time finding the museum and at one point I had to return to town to get more gas so that we could continue our search.

The museum was interesting for us guys. 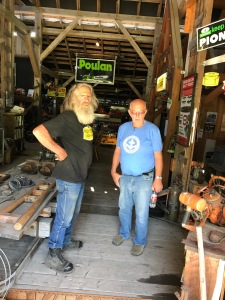 The owner had hundreds, if not thousands of chainsaws, some that were brand new and had never had gas put in them; others were antiques. 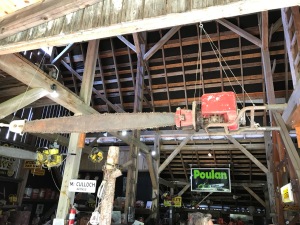 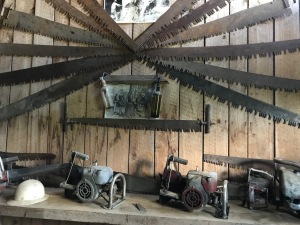 One of the old Husqvarna chainsaws had a large hole in the middle so I took a picture of Ike through the middle of the guide-bar.   We have not been able to figure out the significance of this special shape. 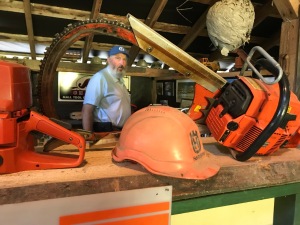 There was also a hand-carved, toy, wooden truck and motorcycle on a trailer that had been made to scale, apparently by a ‘ convict ‘ while he was serving time in jail.  The doors of the truck opened, there were hidden compartments, the inside was upholstered, the parts were removable and there were even pedals, a gear shift that activated a hidden compartment and small wooden tools under the seat of the truck.

We also toured his shop where he cut and prepared wood for special orders.

Outside he had a ~110 year old Harley Davidson engine in a old mini race car.   The owner started the engine for us and I was amazed at how quickly and smoothly it ran.

He also had some other old vehicles on his property,

as well as, some more chainsaws.

He showed us some shipping containers that contained hundred’s of more chainsaws that people had sent him.

We also saw a bus converted to a mobile home that was very unique, but I forgot to take a picture of it.

We weren’t there very long and on our way home we stopped at the ‘ Tastie Treat ‘ restaurant for milkshakes.  By 4 pm we had returned to camp and the crew that went to Christina Lake returned shortly afterwards.    Most of us had supper together, consisting of the leftovers from the previous week.   When Sam, Justin and Jon returned from Osoyoos, they also made themselves supper from the leftovers.   Afterwards, Sam put on a bicycle helmet which had a stuffed lion toy attached on it as he rode a bicycle around the dining hall before heading outside to go for a ride.   I joined him and we rode for a few kilometres before returning to camp. 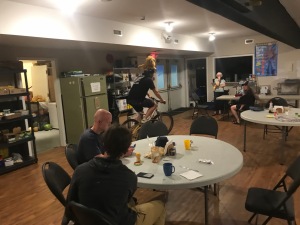 Most of us conversed for the majority of the evening or relaxed in our rooms, while Maria and Vanessa played scrabble, before we slowly mad our way back to our rooms for the night.