When I got up, I packed up my tent and headed into town for breakfast. While I was there a 70-year old gentlemen named Ron Roesler from Kansas joined me and we exchanged stories for a hour while having breakfast. Ron started an online trading company years ago and he is now retired and was heading to Fairbanks, Alaska with his dog, Polo, to go fishing for a week. He had a very interesting background and I enjoyed listening to his stories.

After breakfast, I took the ferry across the Yukon River in order to take the “ Top of the World” highway to Alaska.

Along the way I saw this fox who looked like he could use a good meal.

A little while later, I saw this marmot on the side of the road.

The “ Top of the World” highway winds around the top of the mountains and there are some sheer drop-offs in several places. It is not for the faint of heart or people with a fear of heights, but the scenery is beautiful. 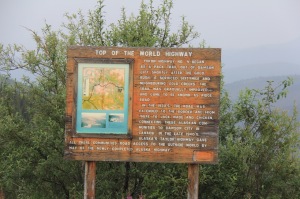 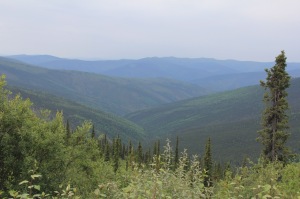 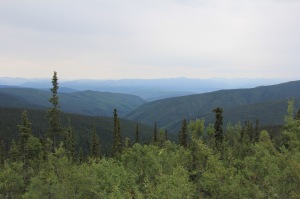 The highway takes you through the mountains to the U.S. border, which is at an elevation of approximately 1250 m (4100 ft). At this point the there is another time change. Alaska is 4 hours earlier than Niagara. When it is 8 am in Alaska, it is already noon back home.

At the border the highway had been recently paved on the U.S. side, up to the cut-off going to Eagle, which is a town at the mouth of the Yukon. From there the road was unpaved again and in a lot of places it was rougher than the previous section of unpaved road.

Shortly after I crossed into the U.S, I met a bicyclist peddling up to the US. border so I stopped to talk with him for a while. He told me that he was from Switzerland and that he was riding to Inuvik and then back down to Watson Lake.

As the road slowly wound down the mountain sides, I came to the town of Chicken where I stopped for lunch at the Cafe next to the RV Campsite before continuing my trip to Tok. The burger was quite lean and tasty. This big statue is the town symbol.

While I was at Chicken, I saw this tourist trying his hand at panning for gold.

The road south from Chicken was mostly paved with a few short sections that were under repair. Although the road was paved, there were sections that were “ undulating “ like rolling waves and driving over it felt like a disney ride constantly going up and down.

I finally reached Tok in the early evening and located a very nice campsite where I set up my tent. There was a fellow at the campsite from Lafayette, Louisiana, who was taking a 6 week vacation to ride his Harley motorcycle to Alaska and the Yukon before heading back home via the west coast. We chatted for quite some time and I enjoyed hearing about his trip, his work and his family. I’ve met a lot of very wonderful and interesting people on this trip, which alone have made this trip an excellent adventure.

Tomorrow I will head back to Whitehorse, where I will get the oil changed in my car and the tires checked before making my way down the heart of British Columbia.