I left the campsite and as I drove to Edmonton for lunch. The traffic was very bad in Edmonton when I arrived there in the early afternoon and I couldn’t wait to leave.

As I headed towards British Columbia, the landscape slowly changed from flat prairie lands covered with a variety of grain crops to rolling hills with cattle and horse ranches. There was an occasional bison ranch which reminded me of the bison burger I had eaten for lunch in Russell Manitoba. I have had a bison burgers before. They are leaner than a hamburger but they are also very tasty and probably healthier for you.

As I got closer to the Rockies the sight of the road seemingly going to nowhere reminded my eye test I had earlier this year. 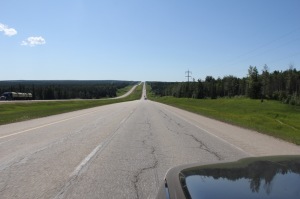 I never tire of the scenery and it is one of the main reasons that I travel by car. It is a beautifully created world in spite of the man-made pollution.

I stopped for the night in Grand Prairie, Alberta, close to the BC border. It is a fairly large town for the area and there were several options for accommodations.

It is approximately and 18 hour drive from Grand Prairie to Whitehorse and I will probably stop for the night somewhere in the Rockies, however there aren’t a lot of towns on the way. Fortunately there are some parks that I might be able to stay for the night.