I like a firm surface to sleep on and I had the ultimate firm mattress under my tent last night. I put on several layers of clothes to make sure that I would not be cold and together with a firm surface, I had a very good night’s sleep, the best so far. There has only been one other time that I have slept better and that was when during my whitewater rafting trip in the Grand Canyon when I slept under the stars without a tent.

I woke up well rested and ready to start driving back to Melbourne. My plan was to get as close to Melbourne by the end of the day so that I could complete the section of the Great Ocean Road I hadn’t travelled before.

I stopped at the same bakery in Myponga that I had visited on the way down to Cape Jervis and had a breakfast pie and a Cappuccino, before continuing my drive. The pies in New Zealand and Australia do not refer to sweet fruit pies like in North America, but generally refer to meat or breakfast pies. Mine had bacon, egg, tomato and a few other goodies inside. It was very good.

No sooner had I passed a sign indicating that there was a potential for kangaroos being on the road for the next 14 km, when I saw one watching me from the side of the road as I passed by. I was glad that he didn’t decide to cross the road at that time. I wasn’t in for a game of ” frogger ‘.

I didn’t stop very often during my drive because I was retracing my steps, however, I did stop at the Father Woods Park to take pictures of the magnificent sculptures at the entrance of the park. I had seen them on my drive to Kangaroo Island but I hadn’t stopped at that time. As quoted from the website:

” On Sunday 23rd May 2010 the Roman Catholic Archbishop of Adelaide, Philip Wilson unveiled tree sculptures at Father Woods Park. It is dedicated to the memory of pioneering Roman Catholic Priest Father Julian Tenison Woods who served in this region from 1857-67.

Sculptor Kevin Gilders has spent many months on the site and has created some amazing designs that are already creating a lot of interest with local residents, as well as those who are visiting the the region or passing through along the highway.” 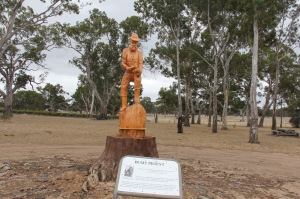 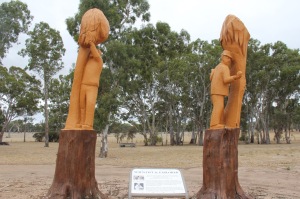 I left the park and drove until shortly after 5 pm, when I stopped in Peterborough to get a campsite, pitch my tent, get something to eat and do some laundry. The campsite is one of the best I have been at, so far. It is very clean and the grass sites are in excellent condition. I pitched my tent on top of a nice grassy spot and although it has been drizzling rain off-and-on and it appears that it might rain during the night, I am anticipating that I will have a warm, dry sleep.