I couldn’t believe how cold it would get at night and I woke up several times, needing to cover up in an attempt to keep warm. It was 8 C ( 46 F ) when I woke up and although I didn’t have a great sleep, I felt rested.

I washed up and went to a local bakery for breakfast, where I had 2 Cappuccinos and a chicken curry pie, while I made reservations for my flight from Melbourne to Cairns on Friday, as well as, a one-day tour of Kangaroo Island on Tuesday. I drove on to Cape Jervis, checked the ferry landing site to familiarize myself with the parking and then drove to a local campground to make sure that I had a place to stay for the night. The campground wasn’t as nice as the other ones I had stayed at, but it had all the necessities, so I booked 2 nights stay, took a shower and proceeded to finish my journal for the previous day.

The agent at the ferry terminal had recommended that I visit Victor Harbour, so I headed there in the afternoon. The views were not as green as green as the ones in New Zealand, but the rolling hills and farmlands were similar. 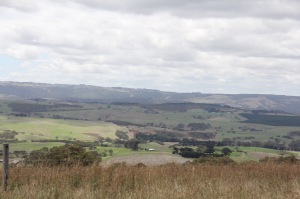 When I reached the top of the hill just before Victor Harbour and looked down at the city and the island off-shore, I could see the attraction to this location.

It is a beautiful resort town and it has a magnificent park honouring the veterans of World War 2. 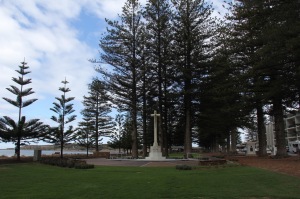 From this view you can see the island in the background and the causeway leading to it. I walked over the causeway to the island and hiked around it. The picture below is taken from the island back to the city. 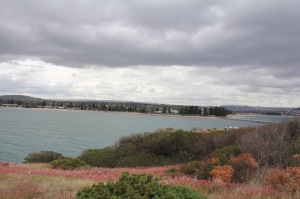 If you don’t want to walk, you can take a horse-drawn trolley across the causeway to the island. 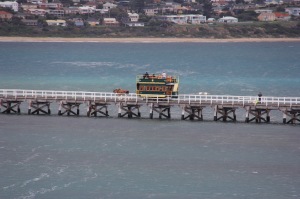 As I hiked around the island, I saw a few different birds but most of them were camera shy, except for this fellow. 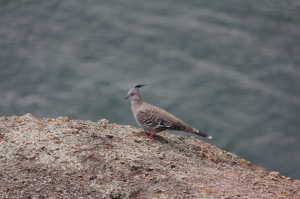 I returned to Cape Jervis and chose to relax for the rest of the evening. Tomorrow I will be going to Kangaroo Island for the day.