I had a good nights sleep and when I woke up, I decided to make plans for the next few days. I thought that it would be a boring day around the motel, but with a little effort everything worked out very well and I was able to spend some time on the riverwalk.

First of all, I tried to arrange a car rental, however, I wasn’t able to get a car until Thursday, so I looked at some options for activities in the area instead. Having checked out some of the options, I decided to walk to the iSite in town, to make some arrangements.

When I reached the iSite, I mentioned my issue with the car rental to the agent, so he made a few calls and arranged a car for me for me to drive until the end of the week. He then arranged a few more activities for me, so that I will be busy until I leave New Zealand.

The downtown area where the iSite is located, is very nice. 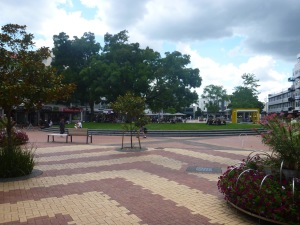 I left the iSite having planned the rest of my time in New Zealand, I grabbed a sub for lunch and returned to my room to wait for my car to be delivered. When the agent arrived, he drove me to the rental agency and we completed the paperwork.

The rowing club is along the river and I snapped a picture of some of the teams practicing.

The Hamilton Gardens can be compared to the Niagara Botanical Gardens back home. They have beautiful gardens, one of which is a rose garden.

They also have a Horticultural School and a Cafe. I stopped at their cafe for a drink and a snack. The view from the cafe overlooked the adjacent pond.

One thing I have noticed in New Zealand is that they have a lot of bees and one of the species is very large. They have a small problem with infection, but nothing like the bee populations in the US and Canada. 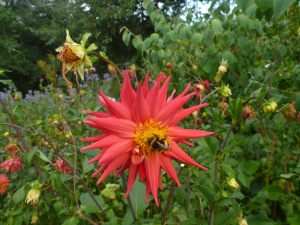 There were also several very unique trees including this huge Eucalyptus tree.

I posted some of the pictures I took of the flowers, at the following link.

Tomorrow I have a full day planned and I am looking forward to it. Stay tuned for tomorrow’s update.