We had a free morning, so we took our time with breakfast and then walked the short distance to the town square.

We checked out many of the shops in the area although we didn’t buy anything of significance.

By the time we returned to the hotel, it was already early afternoon, so we ate lunch in the restaurant and then rested for a few hours before our evening excursion.    During this time I walked back to the local pharmacy and topped up my mobile phone SIM card for a few dollars.

At 3:30 pm our guide and driver, Antal, returned to the hotel to take us on an excursion to see the petroglyphs in Talabre and the Salt Flats at Chaxa Lagoon. 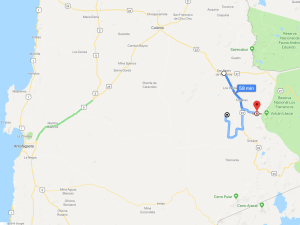 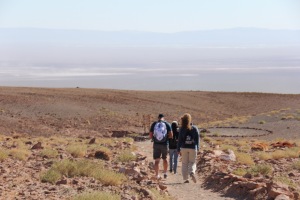 As the guide explained it, there were many different petroglyphs from different eras etched on the walls, each with its own story to tell.  The one below depicts two male llamas fighting for territory.

From the petroglyphs, we drove to the salt flats where we found flamingos feeding on tiny shrimp in the pools.

We ate a small snack as we watched the sunset over the lagoons.

However, the colours were much more spectacular on the other side of the salt flats.

We shortly after sunset and arrived back at the hotel by 8:30 pm.