We had breakfast at 7 am in the hotel, finished packing our bags and waited for our driver.   He arrived at 8 am and we headed north to Patagonia. 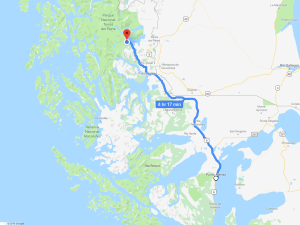 As we left Punta Arenas, we passed many cattle, Llama and sheep farms, as well as rheas ( cousin to the ostrich and emu ) and other different birds we had never seen before.

We drove for 2 hours, stopped for a lunch and then continued for another 2 hours, in order to get to our hotel in the Torres del Paine park in Patagonia.

The Rio Serrano hotel, where we are staying, is located in a valley between the Andean mountains.    It is a luxurious hotel and has a wonderful view of the surrounding mountains.

We arranged for a condor sighting tour that would leave at 3 pm and then settled into our rooms.

We left the hotel on schedule and as we drove to the location where we should be able to see condors, one of our guides made a rare sighting that made my vacation complete. 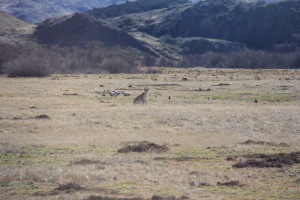 I have never seen a puma in the wild before and there was one that appeared to be hunting, as it stalked its way across an open field, about 30 meters ( 100 ft ) from us.

When it disappeared into the underbrush, we continued on our way.   As we approached the trail, we had a clear picture of the first hotel in the park ( on the island below the mountains ) built to encourage sport fishermen to come to the park.    Unfortunately, there are few fish and they aren’t good to eat because of the high mineral concentration in the water.

The condor nest is in the mound at the top of the hill that we needed to climb in order to get a better view of them.

It was cool ( 8 C, 47 F ) and combined with a strong wind it was even cooler.    By the time we were almost at the top, the wind was so strong that we could not climb the last section on to the mound, due to safety concerns.

However, we spotted the condors flying above us.   The condor is the largest flying bird in the world if you combine weight and wingspan.   The wingspan can reach lengths of 3.3 meters ( 10 ft 10 in. ).

We also spotted the nest in the mound on the hill. 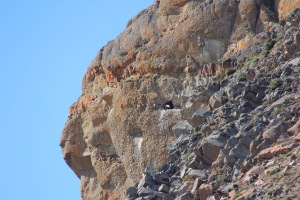 In all, it was an excellent day!

We hiked back down in the wind even thought it tried to keep pushing us up.     When we got back to the van, we drove to the hotel, took showers and rested a bit.   At 7 pm we met for supper in the hotel.   There are no stores or restaurants in the area, however, our accommodations were all-inclusive, so the ‘ a-la-carte ‘ meals were all part of our package.

After dinner, the staff made a fire in one of the lounge fireplaces and we spent a few hours, listening to the crackling from the flames as they slowly devoured the wood.