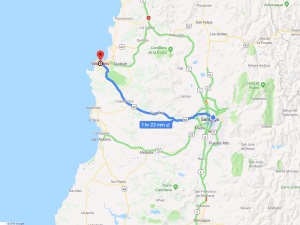 We reached this coastal city by 10 am and as we drove through the city, it reminded me of San Francisco since most of the houses are built on the hillsides and many of the streets are very steep. Maurice drove us to a lookout at the top of one of the hills so that we could take some pictures. 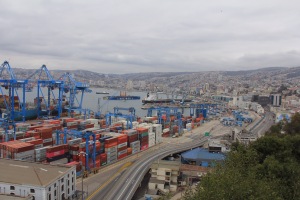 The shipyard is expansive and, as we found out later, many of the houses are built using the corrugated materials from the shipping containers.   From the top of the hill, we took one of the many elevators to get down the hill where Maurice was waiting for us. 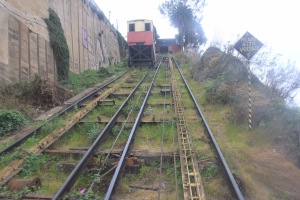 We visited a few of the old homes and stopped for a short while near the original town square.   The blue building in the background had been the city hall until it was converted to a naval hall after the relocation of the city hall. 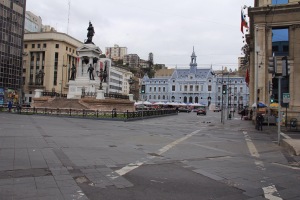 The temperatures had risen to a comfortable 22 C ( 71 F ) by the afternoon.   One thing that is common in Chile is the graffiti.   It is everywhere except where people had been hired to paint murals. 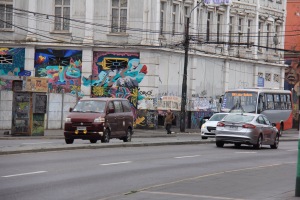 We stopped and toured the home of one of Chile’s famous poets, Pablo Neruda, that had been left with its artifacts intact and turned into La Sebastian’s, the Museum House. 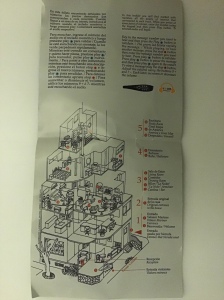 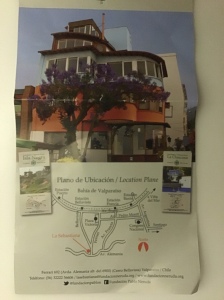 I took a picture of Pete & Kathy outside ofthe house which was located on the edge of a cliff. 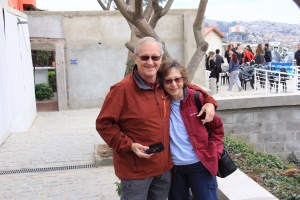 At 1 pm , we stopped for a small lunch at a local cafe before continuing our tour of the city.   We were introduced to numerous art shops along the way and Fr. Richard bought a watercolour painting to add to his collection.

We left Valparaiso at 3 pm and returned to the hotel at 4:30 pm.   We printed our airplane boarding passes for the next leg of our trip and then headed to a local restaurant called El Txoco upon the recommendation of the hotel staff.    When we arrived at the restaurant, we found out that the the waiter couldn’t speak English, however we were able to translate enough of what he said, to order our food.    I had a grouper in a pesto sauce with fried onion, Pete and Fr. Richard had grilled steaks and Kathy had an appetizer and then we split a couple of desserts which had been recommended by the waiter.   The food was excellent and the waiter was very patient, helpful and very entertaining.

After supper, Fr. Richard, Peter and Kathy went to Mass at a local church, while I went back to the hotel to start writing my journal for the day and packing my bags for our upcoming flight.