In 2018, Pete & Kathy Roethler, Fr. Richard Burchell and myself decided to investigate the possibility of a trip to Chile and Patagonia.    We have travelled together a few times, most recently to Peru to see Machu Picchu and after checking a couple of tour companies and several options, we decided to go on a 15 day tour with Audley Travel in September of 2019.   This trip had a personalized agenda with plenty of time for side trips.

Our flights were scheduled to leave at 6:30 pm on September 11, 2019 from Cleveland , so I left home at 6:20 am on Wednesday morning, in order to drive to Pete & Kathy’s house in plenty of time to get to the airport.

After a nice lunch, we arrived at the airport at 3 pm and went to the United Airlines lounge ( thanks to Pete and Kathy’s VIP status ) until it was time for our flight to leave.    Pete also got us upgraded to first class seating for our 2 1/2 hour flight from Cleveland to Houston.    During the flight, the fellow sitting in front of me had an issue and caused a bit of a ruckus with one of the stewardesses and it took a while for one of the stewards to calm him down.   Fortunately, it did not affect our flight and the United Airlines staff in the airport met with the passenger after the flight.

When we landed in Houston, we proceeded to our gate and then I walked around the airport trying to purchase a AAA battery but after 30 minutes of searching I gave up and returned to our gate.

After a 2 hour layover we continued to Santiago, Chile.   The flight took about 9 hours and sleep eluded us on the plane but I was able to snooze a bit.

When we reached Chile we had a great view of the Andean mountain range.   The mountains reach up to 7000 meters ( 23000 feet ), however most are 5000 meters or less.   They are mostly barren, however, there are some villages and lush valleys in between them. 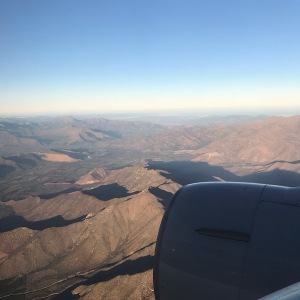 We arrived a bit early, which gave Pete, Kathy, Fr Richard and I, a lot of time to clear custom. 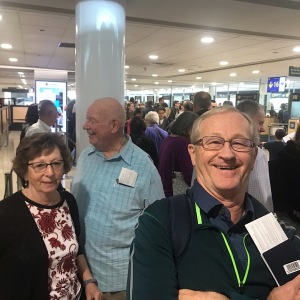 We adjusted our clocks an hour ahead, to the local time and after we got through customs, we picked up our luggage, exited the baggage area and looked for our guide.   Someone intercepted us and tried to convince us to pay for a taxi to go to our hotel.   Fortunately, we had been warned that this might happen and we ignored the people and eventually I found our driver holding a sign for us.   The driver took us to our guide, Katja, and we proceeded to the Hotel Altiplanico Bellas Artes, which is located in central Santiago about a 30 minute drive from the airport.

The staff were very helpful and the rooms are very nice. 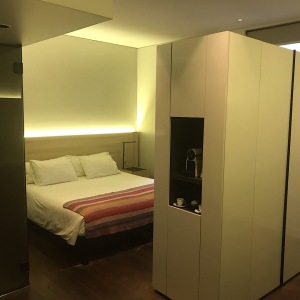 One of the first things they asked us was, “ Who gets the matrimonial suite “?.   Fr Richard and I decided that we would let Pete and Kathy have it.   We settled into our rooms and then we met downstairs for some coffee and cake.

The brochures had mentioned that most of the coffee in Chile is instant and not very good, however, the hotel had a espresso machine using freshly ground Brazilian coffee beans and it made a very good Cappuccino.

After a few cups,  I went down the street, as directed by the hotel staff, in order to find a local SIM card for my phone.    As I walked down the street, I was surprised to find so many people  at the numerous little shops in the area, however with a population of 6.5 million, that is not unusual for a large city.

I found a ‘ Movistar ‘ location which is one of the 2 main phone plan providers in South America.   I had a few surprises.   The hotel staff had told me that the agents would probably speak English and I would be able to use my credit card to pay.   Both of these statements were not true.   When I got there I was told that I would have to pay in Pesos.   Fortunately with the little bit of Spanish I knew and the little bit of English the agent knew, I was able to find a money exchange kiosk in the mall area and buy some Chilean pesos.   I received approximately 700 pesos for each US dollar.   At home, Kathy had received only 600 pesos for a US dollar.

I returned to the Movistar kiosk and purchased a SIM card for 3000 pesos ( ~ $3 US  ).   I couldn’t use google translate because my phone wasn’t activated yet, so the agent used it on her computer to let me know that I would have to buy credit at a pharmacy to activate the phone and then she directed me to a pharmacy, where I stood in line for 20 minutes while two customers purchased medications.    It was finally my turn and again, the pharmacist didn’t speak English, however, I was quickly able to let him know that I wanted purchase a package for 4000 pesos.

I still had problems accessing the internet, so I stopped at the Movistar kiosk again and the agent helped me modify my iPhone account phone number and I was finally in business.     As we were leaving the airport, the guide had told me that we could have purchased a SIM card at the airport if I had let her know before we left and in hindsight it would have been easier, but not as much fun.

I returned to the hotel with my new phone number ( 96 153 4367 ) activated and the internet enabled.    Pete was waiting for me when I returned, while Kathy and Fr. Richard had gone back to their rooms to shower and rest.   They had made a decision to meet at 3 pm to go for dinner, so I proceeded to my room to work on my journal, rest a bit and take a shower before leaving.

We wandered around the area, visited the Basilica de la Merced and I bought some AAA batteries, before stopping at a local restaurant called A su Mer-C.   The waiter took our picture before we enjoyed a fine fish dinner.

Peter and Fr. Richard had the sole, Kathy had the Salmon and I tried the Conger fish, which belongs to the eel family.     We finished eating around 5 pm, slowly made our way back to the hotel and had coffee before we headed to our rooms, for some much needed rest.

2 thoughts on “Flight to Santiago, Chile”