We had breakfast and devotions, as usual, before heading to the job sites.   Peter was flying back home around lunch time from the Castlegar airport so he didn’t go to the Fillo job site.  Robert went there by himself and left from there to go home for the weekend.

Jon went back to Barbara McClelland house and continued his work there.

Justin went to Kent Tough’s house and continued the painting.   Gordon and I went there as well,  so that we could try to texture the living room ceiling.   Justin and Gordon taped the walls to avoid splatter from the texturing, getting on them.   I went to the Redding house and picked up the leftover drywall mud for the texturing.  Below is a picture taken from the outside of Jesse and Courtney Redding’s house. 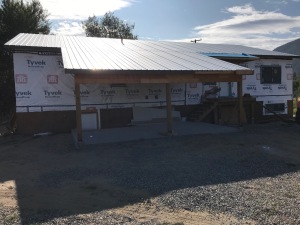 When I got back, I rolled the mud on the ceiling while Gordon textured the surface.  Everything was going well until we noticed that some of the drywall tape on the ceiling was letting go from the ceiling and starting to hang down.   We added more mud under the tape and continued texturing.   When we were almost finished we noticed a bubble in the ceiling that was getting larger.   Gordon took a putty knife and tried to remove it but the more he scraped, the bubble grew.    It appeared that the paint on the drywall was softened by the mud and was releasing from the ceiling in the area.    We couldn’t reach Roman or Mark Rempel ( the new director ), because they had left to drive Peter to the airport, so we stopped the texturing and I rolled a small section on one side of the bubble to see if it would stick to the unpainted ceiling. 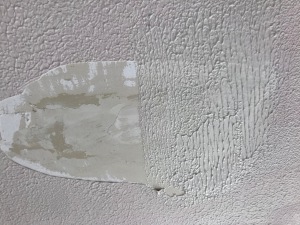 We got back to camp about 12:30 pm, had some lunch, cleaned up our rooms, showered and packed up our things.   By the time we were finished, Roman and Mark had returned to camp and Gordon explained the situation to them and suggested that they consider drywalling over top of the drywall on the ceiling and then painting it.

We said our goodbyes and then Gordon, Maria and Vanessa drove to Rosedale, BC to visit family, while I headed back home.

I drove the 15 minutes it took to get to the border and waited my turn in line.   The border guard was very friendly and extremely talkative.   I waited while he took his time with the people in the two other cars ahead of me.   When it was my turn, the guard noticed that I was from Niagara on the Lake, so he talked to me about Lewiston, New York, fishing in the area and good seafood restaurants that he knew, as well as, suggesting that I was taking the short route back home with access to cheaper gas along the way – both of which were true.

I made it across the border unscathed and started my long journey back home.   The trip should take 38 hours of continuous driving and I plan to drive back with only a few stops to rest and eat.   I always enjoy driving through the beautiful landscapes in US and Canada.    I started driving through the mountainous  Rockies, covered with evergreen trees as I passed through Washington, Idaho and Western Montana.   When I reached Montana, I was entertained by a lightning show behind the mountains that I would have to cross.  Behind me, I saw a spectacular sunset, but I couldn’t get a picture of it so I committed it to memory.

As I got closer to the light show, a large rainbow appeared over the highway and it started to rain.  The rain quickly became a downpour and I couldn’t understand how the rain could make so much noise on my car until I noticed that there was hail coming down with the rain and it was pounding my car.   Fortunately it only lasted a few minutes and then it was only a hard rain.   It rained on and off after that and I was starting to get tired when I noticed that I had passed through a time change and instead of it being 11 pm, it was midnight so I stopped at the Bozeman rest stop for the night and joined the many other people who were doing the same thing.    The parking lot was full and there was no one in the rest stop.

I dragged out my sleeping bag and pillow, reclined my seat as far as it would go, made myself comfortable and fell asleep by 12:30 pm. 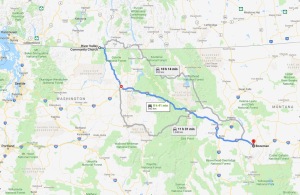