After breakfast and devotions, Gordon, Olivia, Sarah and I drove to Home Hardware to pick up some sanding blocks before going to the Redding house.  When we got there, Sam and Jake were waiting for us and we continued to sand and ‘ mud ‘ the walls.

Gordon almost finished most of the final coat in the living room, while 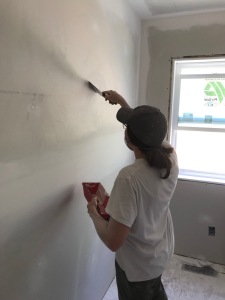 Sam and I continued to sand and mud in the other rooms,

At 8:30 Sam and Jake took some garbage to the dump and picked up a few things that we needed.   While we were taking a break at 10:15, Courtney showed up and we talked with her for a while.   A little later Jesse delivered some stone for his septic bed and talked to me about the bathroom tile and the storage of his appliances in the unfinished basement.

At lunch time, Sam, Olivia, Sarah, Jake and I went to see Jesse and Courtney’s pigs and then we took the short walk down to the river .

In the afternoon, we had a nice treat when Maria, Abby and Vanessa showed up at the house with some ice cream bars that Roman bought for us.   A little later, Courtney showed up and I asked her about the original house and their accommodations.  From the picture below, taken at the back of the house, the little building to the right is where Jesse and Courtney live.   It is their kitchen, bathroom, living room and bedroom, all rolled into one small building.    They used to live in the house  in the background at the far left of the picture.   During the flood, the water had risen to 3 feet in the house and everything in it was destroyed, so they decided to build their new house much higher so that now the bottom of the basement of their new home is now 3 feet above the height the river had reached during the flood. 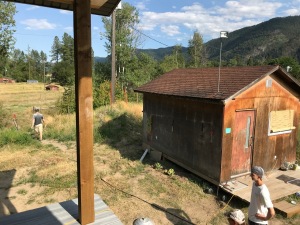 The day passed quickly and we started to pack up at 4:45 pm and then Sam took Jake, Olivia and Sarah back to camp while Gordon and I went to the Tough house to meet Roman in order to determine if the living room ceiling should be textured or stipled.   After deciding that stipling would be the best option, we returned to camp and cleaned up before supper.

Supper had been made by ladies from several of the churches in Grand Forkes and consisted of potato salads, ham, raw vegetables, quinoa and sponge cake with berries and whipped cream for dessert.

After supper, each of the groups gave a report, regarding the status of the work at their job sites, before we dispersed.   During the evening, Roman, Peter, Gordon, Robert and I sat outside for a while and discussed a variety of topics, while the ” young folks ” when swimming and ‘ tubing ‘ at Christina Lake until dark.