After breakfast and devotions, we all went to our perspective job sites, with instructions that we would return at 11 am to clean up before going to the house dedications.

I continued working at Donna’s house and I finished grouting the bathroom tiles at 11:00 am.

Before I left, I cleaned up the floor and then returned to camp, took a shower, changed and drove to Radek and Geordie Grundel’s house for the first dedication, where I met the other volunteers, case workers and some friends of the family. 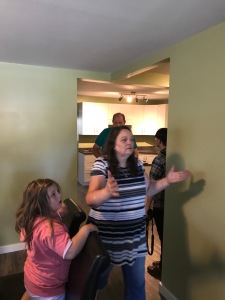 Above: Geordie’s granddaughter and Geordie in the foreground in the house.

Radek had started rebuilding his house before he had suffered two heart attacks.   It was hard for him not to help, but with his condition it could have been very detrimental to his health.    With the help of the case workers and  MDS we were able to rebuilt his home.

Before we started the ceremonies, we had a very nice lunch and then Stella presented Radek & Geordie a quilt, I presented them with a bible and Jon presented them with the book ” The Hammer Rings Hope “.   This was followed by a prayer of dedication by Evelyn and comments by Radek and Geordie, thanking us for rebuilding their home.

Afterwards we walked over to Kirk Walter’s house for their dedication.

Roman Huft, the former project director, had returned for the ceremonies for the formal signing of job contract signifying that the work had been completed. 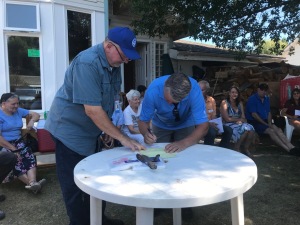 Alice presented a quilt to Kirk and his wife Wendy.

Kevin ( Kirk & Wendy’s son ), Wendy and Kirk took a picture with Justin, who had worked at the house for 3 weeks.

Mike Davis, who had also worked at Kirk’s house during previous weeks, presented the book ” The Hammer Rings Hope ” to Wendy and Kirk. 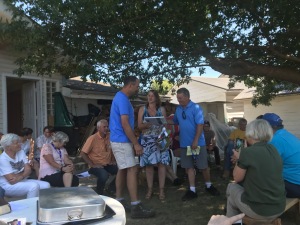 After the dedication we had some cake and visited for a while before returning to camp to clean the trucks, bedrooms, showers and dining area.

Maria prepared the ingredients for each of us to make tacos for supper, after which we had some sharing and then interacted with each other before some of the short-term volunteers left to go home.   The rest of the group took the opportunity to relax before going to bed.