I started my day by showing Gord Martens, one of the new crew leaders, the equipment trailers and the Redding house, where he and his crew would be working.    By 9 am, I was at Donna Lester’s house and I continued to tile her bathroom.   I had almost finished the wall next to the shower, when Ike called me to request some assistance for Justin’s crew with mudding at the Kent Tough’s  house.  At 2 pm, I had finished most of the wall before I left. 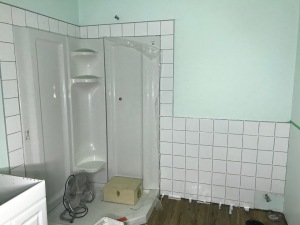 I stopped by the Reddington house before going to Kent’s house and I found Gordon on a platform, taping and mudding the high point of the ceiling. 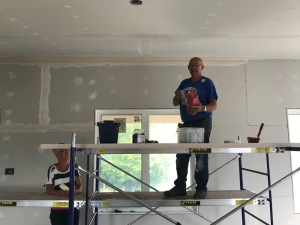 The house was designed by the owners, Jesse & Courtney and the ceiling slopes from 12 ft down to a standard 8 ft.

He had help from Jack, Stella and Alice. 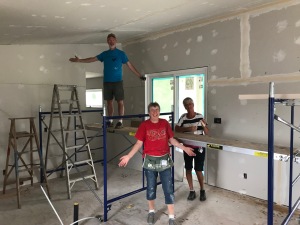 Sam had arrived from Chiliwack in Eric’s piper cub airplane at 8:30 and he had accompanied Cole on a delivery before joining Gordon’s group.

I arrived at the Tough house at 2:30 pm and I found Justin in Kirk’s house next door finishing some repairs and painting. 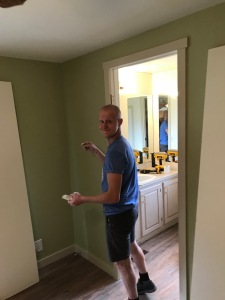 He was being help by John 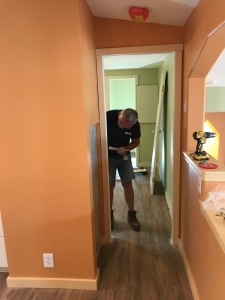 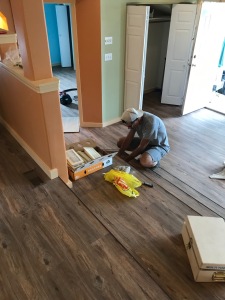 I  reviewed a few of Kirk’s ( the owner ) questions regarding the delay in the installation of the countertop and then helped Justin’s crew finish the last few odd’s and ends that needed to be finished.

We finished as much as we could do at Kirk’s house and, by that then, it was time to clean up and return to camp.

When we arrived back at camp, Maria Martens,  our cook for the next two weeks, had cooked a wonderful meal of scalloped potatoes, meatloaf and taco salad. 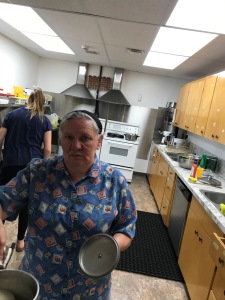 Vanessa, one of Gordon and Maria’s granddaughters had helped her in the kitchen. 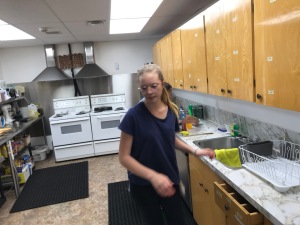 Following the main course, we reviewed the status of each of the houses that we had worked on.   After the updates, we had homemade blueberry pies with ice cream.

A 7:30 pm, Ike and I went to pick up a temporary donated stove and brought it to Radek & Geordie Grundel’s house until their new stove arrived.   Radek & Geordie had started decorating their house with furniture and a lot of different plants.

When we returned to camp, we had a short crew leader’s meeting before relaxing for the rest of the evening.

During the day there was cause for celebration.  Maria and Gordon had been waiting on news regarding one of their son’s adoption of a newly born baby boy and at noon they received confirmation that they were grandparents for the 23rd time.