After our typical breakfast and devotions, we returned to our respective job sites.

Donna was at the house when I arrived and she was eager to talk so we had a lengthy conversation.   She described to me that she had lost her sight while the tandem truck of scrap metal that she was driving was being unloaded.  She was standing outside of the cab ( as she had been instructed to do ), when small metal, steel and miscellaneous debris from the magnet lifting the scrap, showered down on her.  She tried to cover her head to protect herself, but the debris got into her eyes and she instinctively rubbed her them but her sight was immediately gone.  She had been wearing her safety glasses with side shields  but the debris still got into her eyes.    Now she can’t see anything and very bright light causes her pain, so she wears sun glasses all of the time.

She is a very talented lady.   She told me that she had drawn illustrations for children’s books before the accident.   She used to do wood carving with a scroll saw and she showed me one of the pieces that she had made that was hanging on one of her walls.

She also told me about her family, many of her experiences, as well as, the trials and tribulations that she had encountered after her accident.   She a good conversationalist and I listened to her stories while trying to tile her bathroom.   By 3 pm I was able to lay out the tile grid and glue tile around the shower, at which time we were supposed to return to the camp to clean the vehicles, rooms, kitchen and showers.

I didn’t have much information on what the others had completed, but I do know that Radek’s house was completed by Valter, before he went to Kirk Walter’s house to work with Ingried, Justin, Bethany and Ernie.

Before I finished, several volunteers stopped at Donna’s house and toured her garden. 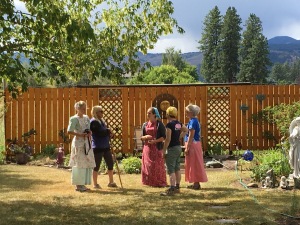 From left to right: Bethany, Donna, Deniese, Yolanda and Sharon

I had driven my car to Donna’s house and when I returned to camp the vehicles and rooms had already been cleaned.  Ingried and Yolanda were thoroughly cleaning the showers and later helped clean the kitchen floors.   Eileen had prepared Watermelon and ” Roll Kuchen ” as a treat before supper.

After supper, several of us drove to the US border which was on the south side of Carson road, 4.3  km south of the River Valley Community Church where we were staying.    The small white sign on the south side of the road is a warning that you are at the United States Border.

On the way back we stopped at a Dairy Queen for some dessert.

From left to right: Ernie, Aaron, myself, Valter, Delbert, Ike and Egon.

When we returned to camp, we spent some time telling jokes and trying to figure out puzzles that Eric had brought. 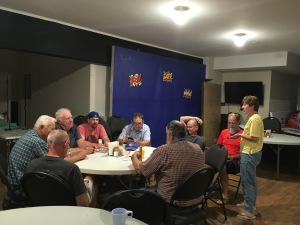 Around the table starting from Valter, who has his back turned to the camera: Egon, Eric, Aaron, Ben, Delbert, myself, Yolanda and Ike.

Several of the volunteers were leaving very early in the morning so we said our goodbyes, before we went to bed .

My plans are to visit my nephew Tim, his wife Shannon and their two children, Warren and Kevin, on the weekend, so I will be driving through Chiliwack and Abbotsford, where several of the this week’s short term volunteers live.