After breakfast, I left a little early in the morning to get gas, top up the pressure in the tires of the rental van and pick up some ice for our job site.

I arrived back at the hotel at 6:50 am, in time to pick up Robert and William before driving to John’s job site to pick up some tools.   After helping John’s team unpack and picking up some tools, Robert, William and I drove to our job site to find the owner, Junior, leaving for work.   We unpacked our tools and continued to add purlins to the back and right side of the house.

as well as, installing plywood on the outside of the house to help support the roof.

William cut the wood for us and helped me rebuild the centre beam which had been damaged. 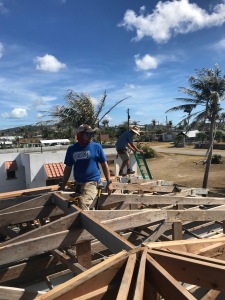 and then he added he added the hurricane straps to the purlins.

By 2:30 pm, we had the back and the right side of the roof ready for the installation of the metal sheeting.  As we were packing up, Harold arrived with Roger Sharp, Jeff Koller and  John Colvin, the new site director.

The other team of John, Sandy, Jeff, Anet and Radar finished most of the roof on the house they were working on and are close to finishing it.

By the time we left and arrived at the hotel, it was shortly after 3 pm.   Radar and Anet went swimming at one of the beaches and I went for a swim at the beach by the hotel, before taking a shower.

John, Roger and Jeff joined us for our review meeting and devotions.   Afterwards, we all went to the Country Restaurant for supper and by 8 pm we were back at the hotel.