The sunrise in the morning was brilliant and I took a picture of it but it doesn’t quite capture the bright red colours. 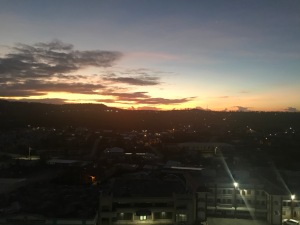 In the morning, all of us drove to the house that a few of the volunteers and I had been working on during the previous week.   John and Sandy ( aka Sanford ) worked on an old section of the roof that needed be be repaired in order to connect it to the new roof.   Jeff and I put up the metal with help from Radar ( aka Dan ) and Anet, after they had finished the extra hurricane straps we had decided to install.

In the morning, Harold had picked up William Hynes, a new volunteer at the airport and at 8:30 am, he brought him to the site in order to introduce him to us before bringing him to the hotel to check in.   By 10 am William was back and helped put on the sheeting.

By 11 am we had installed all of the metal sheets and there was only trim work that was required. 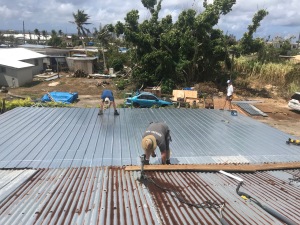 At 11:30, we stopped to eat the lunch of rice, samosas, salad and chicken that had been prepared for us by the owners family.

After lunch Radar installed bolts through some of the wall supports in order to further secure the roof.    We also finished the fascia and the trim work.   John had some challenging trim work for tying the old roof that he had repaired, to the new one, but he handled it with flying colours. 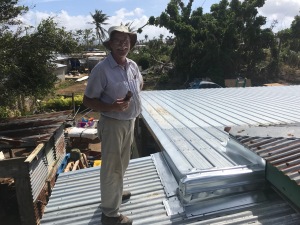 At one point our generator ran out of fuel so I asked Radar if we had fuel and he told me we didn’t have any and it was already 3 pm.  I hadn’t been paying attention to the time because we were all finishing the trim work and there was always just a little more to do, so I had to apologize to the team for having them work past the normal time of 2:30.   We started to pack up the tools and the owner brought out ice cream bars for all of us in appreciation of finishing the roof.  After we finished our ice cream bars we had a prayer of dedication for the owners and their house before leaving the site.  We have collectively finished 7 roofs.

John, Radar and I drove most of the volunteers back to the hotel and then I drove Jeff to the Fire Hall to pick up a Susupe Fire Department shirt, as well as go to JoeTen to get some groceries.

After our project review and devotions, we went to the Oleai Restaurant for supper.   After supper I drove everyone back to the hotel and then I drove William and Sandy to the JoeTen in Garapan to buy some groceries.   By 8 pm we were all back at the hotel for some much needed rest.