I drove Jeff and Sandy to Winchell’s at 6:45 so that they could get a morning coffee and then I picked up the rest of the volunteers at the hotel before going to the job site.

Harold picked up John Miller,  a new volunteer who arrived at the airport in the morning and then dropped by the job site at 9 am to introduce him to us, before checking him into the hotel.    Shortly afterwards, Harold brought John back to help us with the shed roof.   By 10 am we had the first rafter up. 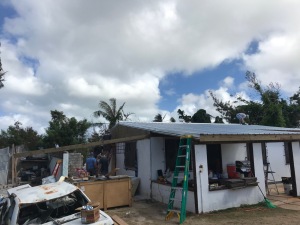 By 11 am we had all of the rafters connected  and we stopped to eat the wonderful lunch of rice and pork in a meat sauce, that the owners daughter had prepared for us.   After lunch, Ed, Jeff, John, Phil and Anet continued to work on the shed roof while Dan ( Radar ), Sandy, Richard and I went to tear off the roof on another house.

The next project was a shed style roof attached to the house that had been damaged by the Typhoon.   Most of the wood was termite-infested and it had to be completely torn down.   By noon the sun was beating down on us and it became very hot.  The temperature was 31 C ( 88 F ) with 62% humidity that made it feel like 36 C ( 96 F ).    We were starting to get very tired, even though we were drinking a lot of water and taking frequent rests in the shade.

By 2:30 pm we had removed all of the roof and some of the walls. 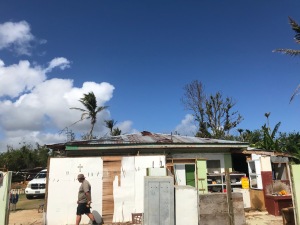 It was getting too hot to continue, so we headed to the other job site in order to pick up the rest of the group, who had almost finished the shed roof. 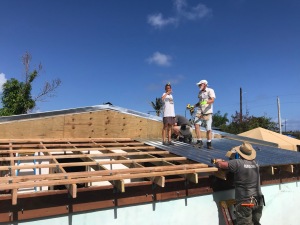 We packed up the rest of the tools into the trailer and then headed back to the hotel for a much needed shower and rest.   As most days, Radar and Anet went to a nearby beach to go snorkelling and swimming.

We all met at 5:30 for our project review and devotions before heading to ‘ Thunder Chicken ‘ for our evening meal.   We were back at the hotel shortly before 8 pm.