I was up by 5:30 am and went to the lobby to call National Travel to have them reschedule my flights back home.   An agent wasn’t available at that time, however, at 6:30 they called me and we changed my flights so that I will be returning late on Sunday evening April 7th.

Most of us started the day by going to breakfast at IHOP at 7 am, after which we all met for devotions at the hotel.   Greg informed us that his granddaughter, who is confined to a wheelchair, had suffered a major health setback and was suffering from pneumonia so we collectively prayed for her health to be restored.

It was a free day for us, so PR, Danny, Kendall, Anet and I went to Forbidden Island.

On our way to the Island we stopped at the house of Gus and Isabella, which both Kendall and Anet had worked on.

Kendall told us that many years ago Isabella had asked Gus to sign some papers after which he found out that it was a marriage certificate.  The house they live in was built by MDS in early 2018 after Typhoon Soudelor had blown away their house.   The new house survived Typhoon Yutu which struck the Island on October 25, 2018.

After a short visit, we headed to Forbidden Island.   The last kilometre ( half mile ) was  an uphill, pot-hole infested, dirt road so I had to drive slowly.   We arrived at the path around 11 am and hiked down the side of the cliff towards Forbidden Island. 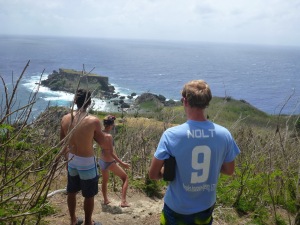 As we hiked around the area, we saw several grottos and rocky areas jutting into the pacific ocean. 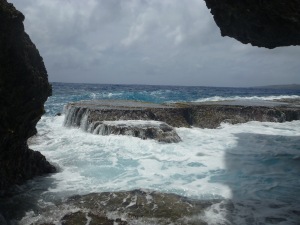 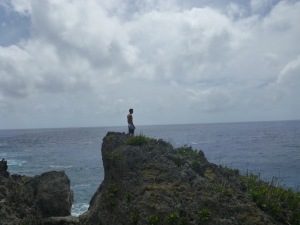 After a lot of searching and climbing over the sharp volcanic rocks, I found a tidal pool.   Meanwhile, Anet ventured to the island while the tide was low and then climbed to the very top.   While Anet was on the island, PR, Kendall, Danny and I  made our way to the pool and spent some time  swimming and relaxing in the pool. 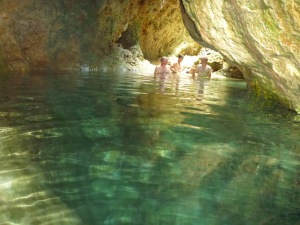 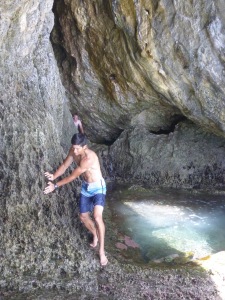 We returned to the path and hiked back up the cliff, got into the minivan and drove to Ben’s ” Farm “, a property where Kendall had help install the roof.   We talked with Ben and he showed us the damage to his farm from Typhoon Yutu including the area where he had lost all of his tangerine crop.

By the time we returned to the hotel it was 2 pm.  Anet and Danny were not hungry, so PR, Kendall and I had lunch at ” Tasty Burgers “.   After returning to the hotel and taking a shower, I, like several of the volunteers, took time to do some laundry.

In the morning, Ed and Greg had gone back to house #2 to finish a few odds and ends while Harold spend the day getting some administrative work done and checking out prospective houses.

Radar and Anet went for their regular afternoon swim and then enjoyed seafood buffet at the hotel.