It was a typical day in a tropical ” paradise “.  Warm in the morning and hot during the day.   We had a little drizzle in the morning but it didn’t amount to anything, however, it was a lot windier.

Ed and Anet joined Greg, Kendall and Phil.   Ed framed and hung 2 doors, while the others finished preparing the roof so that they will be able to install the metal on Monday.

Duane, PR, Danny and myself went to a new project house a couple of blocks from the one we had just finished.   We started the day by working on one of the roof sections of the house that the government had reinforced and covered up with a tarp.  After removing the tarp, we cut away the plywood around the edges of the roof to expose the framing underneath.  PR chipped slots into the back of the lean-to roof and we added some more 2×6 boards under the roof to support it. 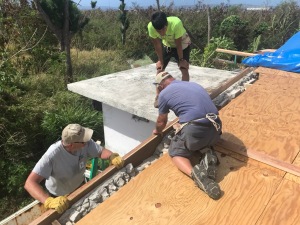 Then we squared the roof on the ” non-square ” block building, as best we could, before installing purlins on the the existing sheeting.

We each did whatever needed to be done, whether it was drilling, breaking out concrete, nailing or cutting wood and everything went smoothly.

At lunchtime the owner brought us some Kentucky Fried Chicken and some soft drinks.   While we were eating our lunches, he told us about his experience during Typhoon Yutu.

He had watched the storm coming in the evening and he hid  ( in the room behind where he was standing in the picture above ) as the Typhoon tried to pull his house from its moorings.   He held on to the inside structure as the house pulsated up and down.   He didn’t want to go outside because debris ( especially metal sheeting ) was flying by his house.   The roof of his mother’s house tore off and flew over the top of his house.   He couldn’t sleep because the storm pounded the island all night long.

After lunch, we continued to work on enforcing the roof structure so it would be ready for the metal.

At some point during the day, PR told me that he thought I look like Si Robertson of ” Duck Dynasty “.  I will have to take his word for it because I don’t have cable TV and have only seen a glimpse of the show at someone else’s house.

After debriefing and devotions, we headed to the Oleai Beach Bar & Grill.

As we waited for our meals, the sunset slowly turned the sky a spectacular array of different colours.