We went to Winchell’s at 6 am to grab a morning coffee and we were on our job sites before 7 am.   Both teams returned to their job sites to continue the work they had started the day before.

On our team, Duane, Dan and Anet continued to put on the hurricane straps. 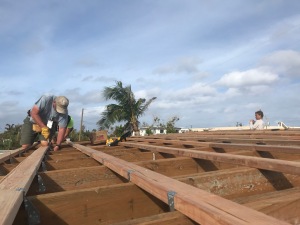 PR and I finished the plywood supports for the purlins.

It rained a few times for short periods of time which helped keep the temperatures a little cooler for a little while, but only a few degrees.    We were ready for putting on the metal roof by noon.

We had some challenges ( aka opportunities ) in lining up the metal, but we persevered and finished the roof before we left.

Meanwhile, Ed cut wood for us and made preparations to install a door on the back of the house. 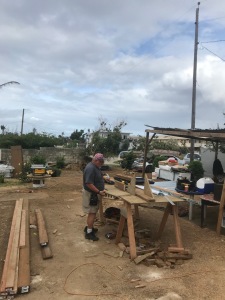 By noon Ed had all the tools and material to install the door.  He added the hinges, repaired the door jams and then installed the knob and lock. 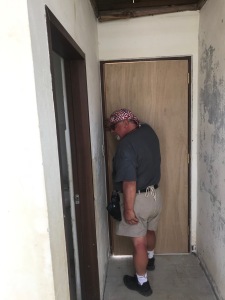 Several family members were there in the afternoon to see the progress and by 2:30 we had finished the roof and the door, so we packed up our tools and then Duane dedicated the roof in a a prayer for the owner and their family.

I was very impressed by the Hibiscus plants around the house that had survived Typhoon Yutu ( https://en.wikipedia.org/wiki/Typhoon_Yutu ) and were in full bloom.

The other crew, consisting of Glen, Kendall and Phillip started to frame the roof for the house they were working on.  They had some challenges with getting the anchor bolts to hold the top plates because the concrete in the block walls didn’t have enough cement to hold the bolts without breaking apart.   They also had some more opportunities with termite infested wood.

We have 2 Dan’s so we have been calling Dan Driediger, Radar ( from the movie Mash ) because his specialty is the getting and delivering tools and material and that’s what he did most of the day.   When he wasn’t doing that, he was assisting the other team.

We returned to the hotel by 3 pm and had our meeting and devotions before heading to the outdoor market for dinner.   It was a beautiful evening and we arrived at the market at dusk.

Harold stopped by the job site a couple of times.   While he was there the first time, he asked me if I would stay an extra week and since I had originally said that I would work 3 weeks and extend it to 4 weeks, if needed, I told him that I would be willing to stay until April 6th.  When he stopped by the job site at noon, he had mentioned to us that a picture of the house that had been completed yesterday had been circulating within the FEMA organization  and he had received very positive feedback from them.