It was a warm,  slightly overcast, morning at the hotel.   There was a beautiful view of the lush gardens with its many tropical plants next to the dining area.

We ate breakfast at the hotel, before heading to a ‘Discipling for Development’ meeting in a local building.   The ‘D for D’ program, was set up by pastor Eric to train leaders in the church so that they could go out and share the gospel and support each other.

We arrived at the meeting at 10 am.

When we entered the building,  they were singing a hymn. 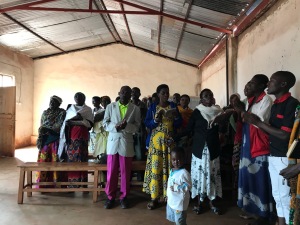 After the hymn, introductions were made and a few of the members shared their testimonies.   For example, one was a lady who been in a wheelchair and spent many years begging.   With the help of people from the church, she can walk, she farms, she sells the produce and she disciples other people she comes in contact with.   One gentlemen, had to live on the street when his mother died and ended up getting involved with drugs.    Through the guidance and assistance of church members, he has turned his life around and now he counsels other kids.

The stories were all very moving.  After the testimonies, the pastor prayed for our team and then Jeff gave them some words of encouragement.

Doug prayed for the members of the church before we left and then we got back into the van and headed back to Bujumbura.   The drive took a little longer than expected.     The road was closed for some time and we were ordered to pull over  until the Burundian president and his military entourage drove by.   After he passed by, we were allowed to continue.  After a few short stops along the way we finally arrived back at the Swedish Mission by mid-afternoon.

As soon as we got to the Mission, we checked into our rooms and then Doug took Jeff, Michele, Andrew, Gisela and Rachel for some shopping at the market.  When they returned, we all drove to a local spot on the lake where occasionally hippos can be seen.  Unfortunately, we didn’t have any luck so we preceded to a restaurant for supper, after which we returned to the Swiss Mission to pack and get some sleep before the long journey back home.

The map below shows the routes we had taken as we travelled around Burundi.

Tomorrow we plan to visit a get-together with pastor Eric’s church before heading to the airport at 3 pm for our flight at 5 pm ( 10 am EST ).   We have a ~2 hour flight to Addis Ababa, followed by a 2 hour layover, then a 7 hour flight to Dublin, Ireland for a short stop before continuing to Toronto on another 7 hour flight.   We are scheduled to arrive in Toronto around 8 am Sunday morning.