Unfortunately for Gisela, it was her turn to have a bad night’s sleep.   On the other hand, the cups of Neocitran and cold medicine that Matthias took on Sunday, helped with his cold and he was feeling better in the morning.

Doug picked us up at 8 am, after our usual breakfast and we headed to the Harvest offices to meet some of the team and pick up our paperwork for travelling in Burundi.  The street where the offices are, was blocked off by the police because a government official was going to be driving by the street , however, they let us go through.   One of the Harvest employees gave us a tour of the office and then Doug explained a few of the initiatives undertaken by Harvest.

It was after 9 am before we were back on the road again.  We drove through the switchbacks along the mountains. 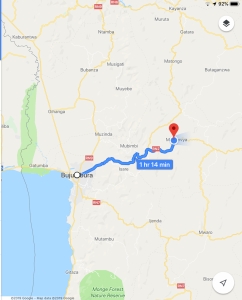 Bicyclists frequently hold onto the back of trucks in this area in order to help them get up the mountain. 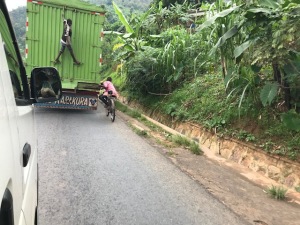 Some truck drivers have modified the back of the truck so that the bicyclists can’t do that.

When we arrived in Muramvya, we were met by Bernard, the pastor of  Shammah Temple Muramvya ( and off-shoot of the Shammah Temple in Bujumbura ) and accompanied us to the Hotel Baze.

We checked in, put on some work clothes and drove to a entrance of the path leading to a house that is owned by a family that the church is supporting with money donated by Cornerstone in order to rebuilt the roof.   We hiked up the long winding, mud path through the farms to the house. 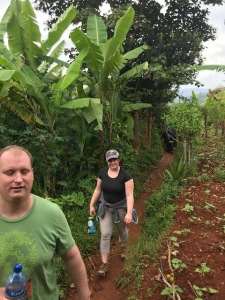 At the house we met the owners and the church members that were there to help put the clay tiles on the roof. 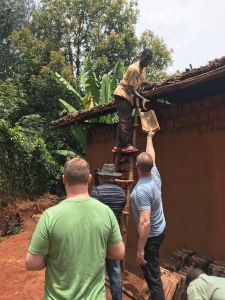 We had some fun with children and Jeff entertained them with some magic tricks. 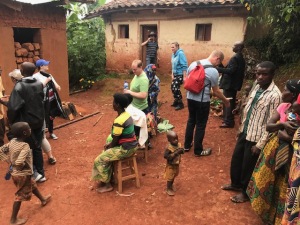 Pastor Bernard had a short service message for the people there and then we prayed for the family.   We took a picture with the wife and one of the sons.

The father was bringing up clay tiles and when he heard that we were about to leave, he ran up the mountain to meet us. 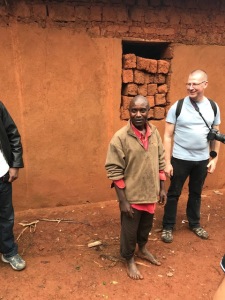 We hiked back down the mountain and when we got back to the van we were surrounded by a curious throng of people, however, Doug managed to get us out of there and we drove back to the hotel, changed and then drove to the place where the Shammah Temple Muramvya is being built.   Cornerstone supplied the majority of the funds for the church and it will be an impressive building when it is finished. 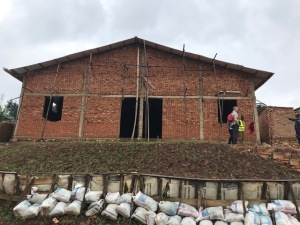 Pastor Bernard posed for us in the church

and in front of the church with Jeff.

On our way to the hotel, Matthias, Andrew and I walked back and were soon surrounded by people after a gentlemen from the church stopped to talk with us.   We continued on our way and arrived at the hotel to relax for a while before supper.

At 6 pm, we got together at the hotel with the leadership team of the church and we each told the group a little about ourselves, discussed the challenges facing each of our churches and then prayed for each other.    It was close to 7:30 when our meal was ready.  Matthias, Gisela and I tried a local dish, which is similar to manioca and had been recommended by Doug.

The rooms we have at the Baze Lodge are very nice, however, shortly after we arrived, there was no running water in the rooms, so we had to use large pails of water for washing.   We are so spoiled in Canada.   In Burundi they have very little and the people are happy.