The day was mainly cloudy and cool with temperatures only a few degrees above freezing.

Building a bridge is similar to a lot of other projects in that it requires a lot of preparatory work to be completed before the final stage that is the most visually appealing.

The day started poorly for me when I broke the key for the tool trailer while opening it in the morning.   It took me an hour to finally get the broken part of the key out of the lock so that we could open the main door of the tool trailer.

There were many different jobs to complete that I can’t remember all of them and we helped each other on several of the jobs.

Roger welded the angle iron no the ends of the bridge, 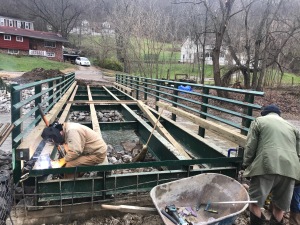 As well as the cross member supports under the beams, 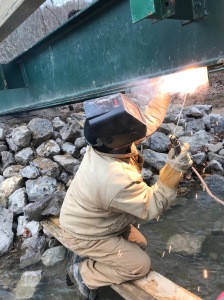 And welding on the railings.

Justin worked with Terry to install the framing for the concrete that was to be poured at both approaches to the bridge. 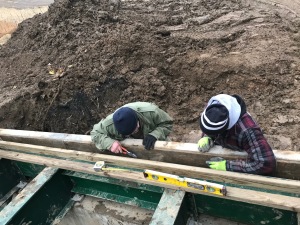 Justin also helped with clean the steel for painting, the concrete work and several other jobs.

Braeden did some grinding, tightening of bolts, cleaning of the welds in preparation for the painting, 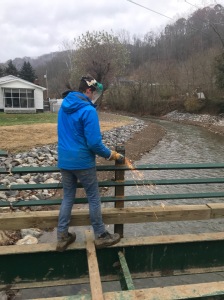 As well as some mixing and pouring concrete for the roadside approach to the bridge. 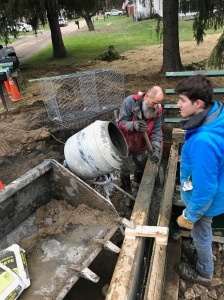 Bernie and Spencer tightened bolts, helped clean the welds for painting, assisted with the pouring of the concrete and they replaced the 6×6 that had been removed to repair the outside beam. 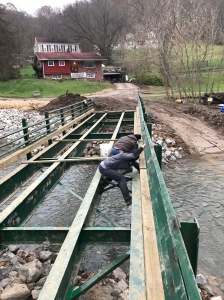 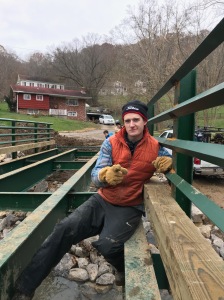 Kurt moved the dirt from the home side approach to the bridge and then filled it with large stone after it was delivered as well as numerous other jobs. Kurt and his skid steer have been invaluable.  He lifts steel, rock, dirt, cement mix, pipe, etc, which makes it easier for us to do our jobs.

The work required us to walk along the beams to get from one side to the other because the creek level was too high to walk across without getting our feet wet. 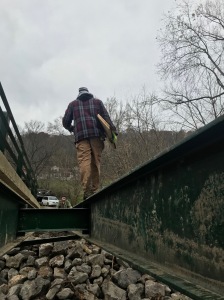 Even though I had put on “ waterproof “ boots to work from the creek, I did get them full of water when I chased after an 8 ft 2×6 that I had inadvertently dropped  into the water, while I was trying to put it on the beams, however, I was able to retrieve it before it floated away in the fast moving water.

It was after 5 pm, when we finally finished the concrete work, cleaned up and returned to the hotel.

The day was very tiring but we were able to make good progress on the bridge.