It was drizzling rain and the temperature was a bit cool when we got up at 6:30 am.  After a very nice breakfast in the lobby of the hotel, Don led us in a time of devotion and then he reviewed the agenda for the day.   Since the forecast was for a light rain all day, we anticipated that there would be limited work to do.  The issue of the defective steel beam had not yet been resolved so that limited the things we could do, however, everyone was eager to do something.

We drove the short distance ( 2 km ; 1 mile) to the work site which was situated on the town side of the Little Grave Creek next to the bridge we would be working on.  As we drove up, we got our first sight of the bridge. 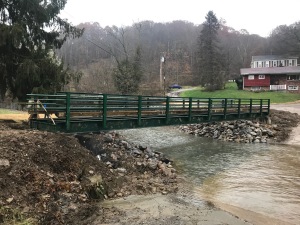 Don reviewed the work he wanted us to do and gave us some background information about the bridge before we started.   The bridge is the only access for several families to get them from their homes to the road which is on the other side of Little Grave Creek.  A temporary concrete pad had been poured into the bed of the creek, in order to allow the residents to get to the other side after the bridge had been washed away in the flood of 2015. 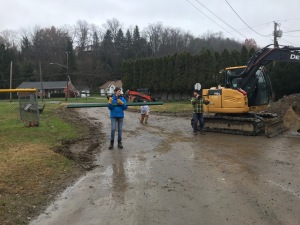 When that was done, Spencer, Braeden and Justin fixed the sign for the job site.

Then they tied some re-bar and bolted down the I-beams on the bridge.

Meanwhile Bernie assisted Kurt with moving and breaking apart a large old concrete slab that had been removed from the original bridge.

Roger and I started the day by fixing the damaged equipment rack on one of the trucks.   After that Roger cut some angle iron pieces to be welded on the bridge railings where they had been cut to allow them to move so that they would not be damaged if the bridge flexed or moved.   When he finished cutting the angle iron pieces, he trimmed the railings with a torch where they had to overlap.

The area around the concrete support for the bridge was filled with dirt and rocks to make the ramp to the bridge from the road.  The area was them tamped down by Justin, Bernie, Braeden and Spencer.  Controlling the tamper occasionally proved to be a challenge, specifically on the rocks.

By 2 pm, welders from the manufacturer of the steel I-beams arrived to repair the issue with the defective beam.   They lifted the beam to remove the sag and welded the crossmembers to the adjacent beam.  This took them until 5 pm.

It drizzled continuously during the day and we were all covered in mud.  We left the job site at 3 pm and returned to the hotel to wash our clothes ( and gloves ), take a shower and relax before going out for dinner.

We were all tired by the end of the day but we were all felt that we had made much more progress than we had anticipated and we were looking forward to continuing the work on the bridge.