Yes, I made it home.  If you want to know how, you will have to read further.

I started the ride on bicycle lanes and soon I was on a bike path that wound through a good part of Waterloo.   The route alternated between roads and paths.  At one point the path went through a heavily wooded area in the Kitchener area. 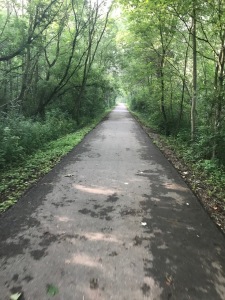 I didn’t even know that these trails existed, however, the Kitchener/Waterloo area is very ‘ Bike Friendly ‘ and they have several options for riding a bicycle in and around the city.

I continued to wind my way through Kitchener and eventually I had to cross highway 401 where Google Maps had directed me to a bridge over it:

As indicated on the plaque, this is the first pedestrian/cycling bridge over the 401 and it was finished in 2007.  After I crossed the bridge I entered the town of Galt where I stopped at a cafe for a short break.

I then rode through Cambridge and headed down highway 8 to Dundas and Hamilton. With very little wind, the ride went smoothly, but there were some steep hills to climb in Cambridge, which slowed me down considerably.  Highway 8  ( Dundas Street North  ) was quite busy and it had very narrow paved shoulders, plus there were a lot of transport trucks and tandem dump trucks passing me, very few of which, moved over.

At one of my stops, I noticed that Pleasant Manor Retirement home had called me, so I checked the message, which was from one of the placement officials letting me know that there was an apartment available for me, if I wanted it….hmmmmm….. I thought this was interesting.   I had put my name on the list several years ago to make sure I could get a retirement apartment, if I ever needed one but now I was wondering if someone was trying to tell me something.   After thinking about it for a while, I called them back and told them that I wasn’t ready for that yet, but that could always change.

I knew that I would eventually have to go down the escarpment, however, I wasn’t aware that the road would be very steep, with a very small shoulder and that the whole road was riddled with paved potholes and ruts.   I had to ‘ ride my brakes ‘  and dodge them to avoid capsizing or losing one of the bags.  I rode through the city streets of Dundas and then into Hamilton where I had to ‘ share the road ‘ with cars, trucks and buses.

Hamilton has modified a lot of the roads to make them more accessible for bicycle riders.   On several roads, they have designated one side of the road for 2-way bicycle traffic as indicated by the picture below: 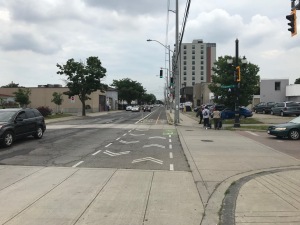 It even has green and red lights just for the bicycle riders and a sign stating that bicycles are allowed to ride in both directions on that section of road, even though it is a one-way street.

At 12:30, I stopped for lunch in the east end of Hamilton shortly before taking a bike path with a bridge that crossed the QEW highway.   I have seen the bridge many times from the highway, but I never knew what it was for, until now. 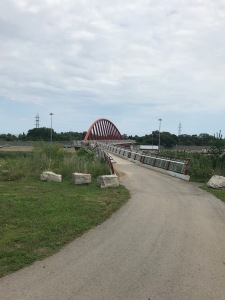 After I crossed the bridge I was in Confederation Park and the bike path was full of people walking, roller blading ( I didn’t know they still did that ) and riding bikes.   From the shoreline, you can see Burlington.

I rode along the path until it ended and then I rode mostly on the North Service Road,  which is between the highway and the lake.   There are bicycle lanes on the service road and occasionally there were signs directing the bicyclists to different paths that are part of the bike trail along the south shore of Lake Ontario.

I stopped a few times for short breaks but I kept on going even though my legs were  starting to get tired because I knew I was getting close to home and it didn’t make sense to stop.

Just as I reached the Welland Canal bridge #1  on Lakeshore Rd, the lights came on, the barricades came down and the bridge opened up for a ship.  What timing!

As I waited for the boat to leave, I met a couple of visitors to Niagara on the Lake who were riding their bike around the area for the day.   We discussed riding and travelling and I found out that they are avid riders who have also climbed Kilimanjaro.   When we were finally able to cross the bridge again, we went our separate ways.   The wind had picked up and seemed to be pushing me back but at 5:35 pm I eventually arrived at home.   I unpacked my bags, took a shower and picked up some groceries before writing my journal entry for the day.

It was an interesting adventure and I saw a lot of things many of which weren’t added to my journal in order to keep the entries from being too long.

In total I rode 1127 km in 12 days although I was away for almost 13 days, dragging around 35 lbs of gear ( 8 lbs of which was my laptop and electronic equipment ). I didn’t ride on day 9 because I had to get a spoke changed on the rear wheel.