It had rained during the night, causing the temperature to cooled down to 16 C ( 60 F ) overnight so that it was still a little cool when I got up in the morning.  I was up  early and I left the motel by 7:30 am.   By 7:45 I found a restaurant along the way and had breakfast before continuing on my journey.  One of the patrons in the restaurant asked me if I was participating in the MS Bike Tour on the weekend.  I told him that I participated in the ride for 17 years and now I sponsor other riders and I was just passing through area.

The temperature remained cool all morning, however, I had a favourable wind that made it easy for riding.

The landscape hadn’t changed much.   There were still alternating fields of wheat, corn and soya with windmills located among them, however, there wore more wooded areas in between the fields.

As I rode through Grand Bend, I looked for the riders attending the MS Bike tour from Grand Bend to London but I didn’t see them, so they must have changed the start location for the ride from what I remember.

The road was quite busy, but there was a shoulder for bikes so it didn’t impede my progress and I reached Bayfield at 11 am, where I stopped for lunch at Renegades Diner Bayfield.   The diner was full and there were no empty seats so the waitress set up a single table for me.   The food and service were very good and I could see why it had a high customer satisfaction rating.

After lunch I rode around Bayfield for about 30 minutes.   There is a nice park

and next to the park is Heritage Main Street which reminds me of a more rustic version of Niagara on the lake, with plenty of shops and restaurants, however, parking here is more convenient. 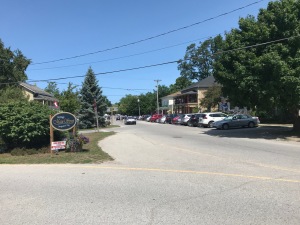 As I left this ‘quaint’ little town around 12:30, the temperature had warmed up a little but there was a headwind, as well as I rode the last 20 km to Goderich,.  When I arrived in Goderich, I rented a room in a small motel and rested for couple of hours before I toured the town.   I haven’t been to this area for over 30 years, when I visited one of my classmates who worked for Sifto Salt in Goderich.

There is a large salt monument that was erected in 1966 by Sifto Salt to commemorate the 100th anniversary of the  discovery of salt in Goderich.

The town of Goderich has a large circle in the centre of town with the courthouse in the middle surrounded by a little park and many different shops, banks and restaurants around the outer edges of the circle. 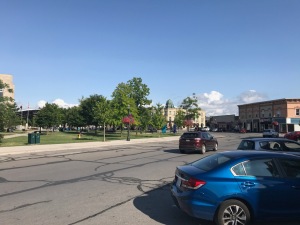 There is also a large shipyard that is still used for transporting salt and other goods. 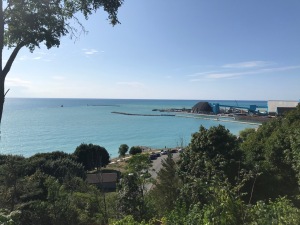 There are a lot of businesses, parks and shops that have the work BlueWater in there name long the east shore of Lake Huron due to blue colour of the water in Lake Huron. The shallower water is a turquoise blue and the deeper water is closer to the a navy blue.

And as with most port cities, it has a lighthouse on display,

as well as, commemorative canons along the shore.

As I drove around the town, I saw a United, Anglican, Presbyterian and Catholic church but as I found out later there are several other churches in this small town which only  has a population of 7600 people.   The churches I saw were quite large and St. Peter’s church had many people attending the 5 pm mass.

I stopped for something to eat while I was in town and I bought a few things in preperation for breakfast in the morning because there are no restaurants along my route to Stratford until I reach Clinton.