I left Sarnia at 9 am and took one of the BlueWater Trails which followed the south side of highway 7.  It is a relatively wide trail and I rode on it for approximately 10 km before exiting it to continue on Highway 7. 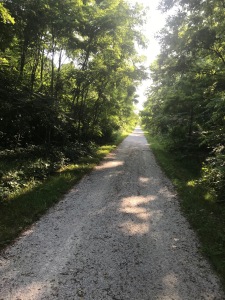 The highway wound its way around Lake Huron and occasionally,  I could see the water.   It was a short ride, so that by 11:30 I arrived in Lambton Shores and checked into the Village Inn motel.   I talked to the owner, Harry Daykin for a couple of hours regarding many different topics.  He is from Northern Ireland and he worked for IBM.  After he retired, a few years ago, he purchased the motel and is enjoying the slower pace of life. During our conversations, he suggested that I ride to Ipperwash Beach and then to the town of Forest.

There are many public entrances to the beach from the road and when I got there,  I saw that there were many families taking advantage of it. 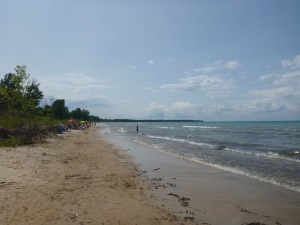 I then rode to the small town of Forest and went to the library that had been the former railroad station as was evident by the railcar at the entrance. 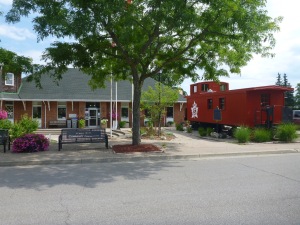 Leading up to the library is the former railroad tracks that have been converted into a bike trail. 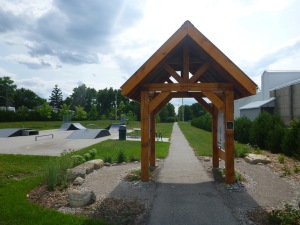 After riding on the trail for a while, I returned to the town for something to eat.   I found a nice cafe called Karyn’s Java & scoops, where I ordered the special of the day and a Cappuccino.   While I was waiting for my food, I read a little of the town’s history.   Forest was a railway station for the Grand Trunk Railway in the late 1800’s and early 1900’s.  It received its name from the area which was deeply forested, when it finally achieved town status and now it is mostly farmland.  In the 1960’s the station was officially closed, with one last train ride.

From Forest, I returned to the motel and started to write my journal before going to bed. 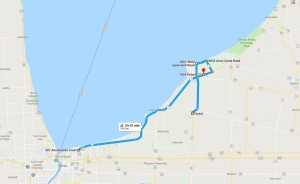 One thought on “Day 10 – Sarnia to Lambton Shores”