After a very restful sleep in a comfortable bed, I was ready to continue on my journey.   I got up at 6:30 am and by the time I had packed up my things, Lou had prepared a wonderful  breakfast of Spinach omelettes, toast, coffee, pastry, and fruit.

Their hospitality made it difficult to leave but it was time to go, so after breakfast I said my goodbyes and headed to the Leamington Ferry Dock to catch the first boat to Pelee Island.   It looked like it might drizzle bu I was lucky and the day started off at a cool 18 C ( 65 F ) and overcast.   It was 23 km to the dock and I made it there, 15 minutes before the boat was to depart even though there was a small detour around the entrance to the dock. 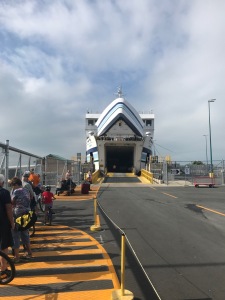 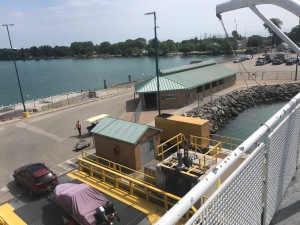 As I got off of the ferry, one of the bicycle passengers had a flat tire.   I pumped it up for him but it appeared that it was a serious leak and would not last long.   I googled the nearest bike shop and fortunately, it was only a few hundred meters away.   He started to ride the bicycle but the tire went flat immediately so he walked it to the Bike shop.

I checked in at the town hall and information centre before starting my ride. 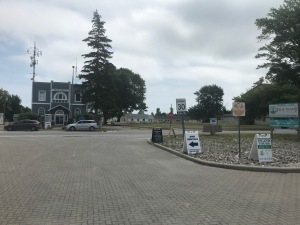 With the newly acquired information, I headed south.  Pelee Island is not very large, but it is a nice place where the people are all very friendly and helpful.   The locals always wave and greet you with a smile.  The distance  around the Island is about 30 km and the vegetation is similar to the mainland.   I saw soya, grape and wheat crops on the island but there may be others I didn’t see any.  I briefly stopped for a picture at the Pelee Island Winery before continuing on my ride. 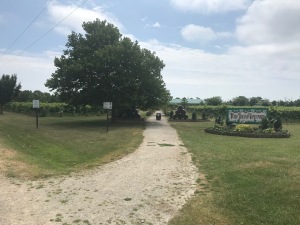 As I got farther south, there were larger trees and the vegetation was thicker. 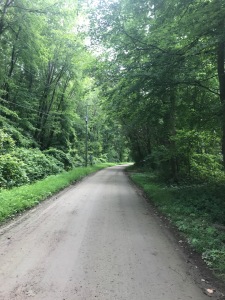 I noticed that there are a lot of butterflies on the island of varying shapes, sizes and colours.  This one stopped long enough for me to take a picture: 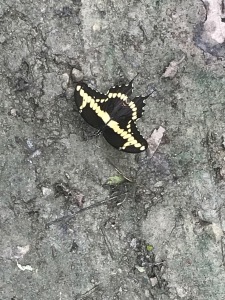 Even though there is very little traffic on the island and no one drives very fast, I found this little fellow who hadn’t made it across the road in time: 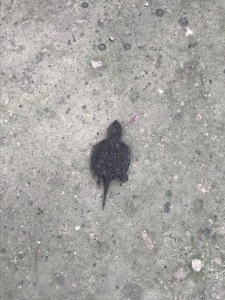 I continued south to the Fish Point Provincial Nature Preserve and I hiked the 1.6 km to the southern point of the Island, before returning to my bike and riding north to the East Park Campground where I had reserved a campsite. 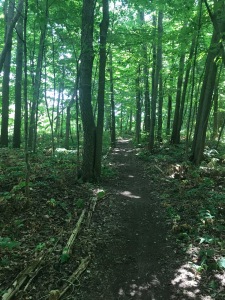 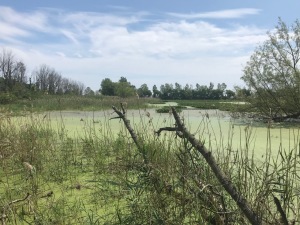 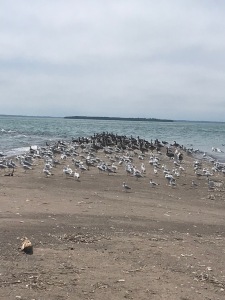 When I reached the campground, I checked in, unpacked my things and let them driy them on the picnic table while I took a shower and then rode around the island.   I rode across the centre of the island back to the dock area because the bicycle shop was located there.   I checked my tires and found that they were quite low ( about 40 psi ) so I pumped them back up to 75 psi.

I continued north until I found this “ shoe “ tree, but I wasn’t prepared to contribute to it: 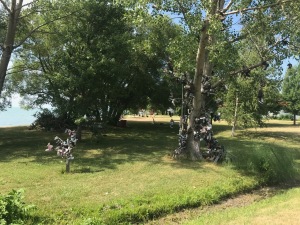 I continued riding until I got to the north shore where I stopped at the island bakery for something to eat and of course have a Cappuccino and a triple chocolate brownie.

I then headed east along the north shore until I got to the east shore and then I rode north along a road that used to lead to the lighthouse but after almost reaching it, I had to turn back because the road had been washed out.  There was no path straight ahead through the trees, there was a swamp on the left and the lake on the right, so I turned back and rode to the campsite.   At the campsite there were two travellers on BMW motorcycles.  One motorcycle was a very nice 2008 K1200S but what caught my eye was the classic BMW R 75/6, which is a 43 year old 750 cc, BMW motorcycle. 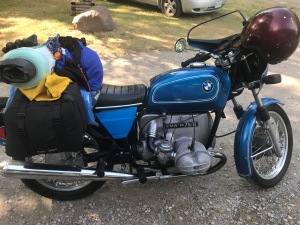 I talked for a little while with them before returning to my campsite to write my journal.  The weather prediction was for a 30 – 40 % chance that it will rain overnight on the island.  If it does, I will probably get wet. 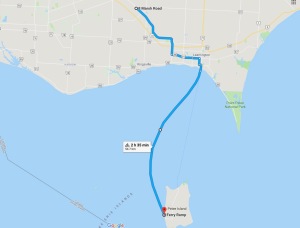 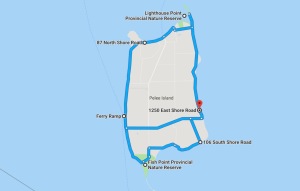