It was cool in the morning but it wasn’t as crisp as Tuesday.  The temperature warranted us to ” layer ” our clothing and as the temperature got warmer, we removed some of our extra shirts or jackets.

After making our lunches we ate a hearty breakfast.

As every morning, we finished our meal with a time of sharing.

Clinton was waiting for us and he was happy to see us.

After the concrete had been tamped down, Merle finished smoothing it out. 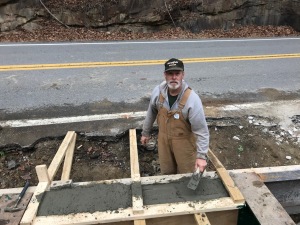 After that, Merle, Justin, Spencer, Mary and Bernie, help tamp down the concrete on the house side of the bridge.

Peter smoothed the concrete after it had settled.

Steve and I assisted Wendell with tack welding the metal sheets to the steel beams. 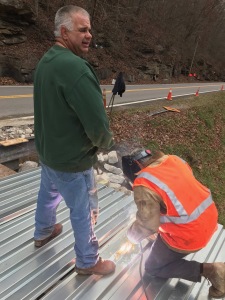 Pat cut the 4×4’s that will be used for the curbs.

Justin, Merle and Peter assisted Steve who was operating the track hoe in order to repair a hole in one of Clinton’s underground tanks. 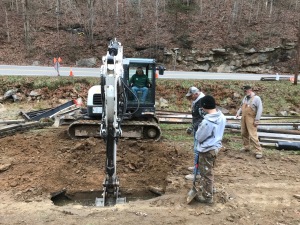 When the metal sheets had been attached to the steel beams, I assisted Justin with the cutting of some of the rebar, which was something he had been doing with Spencer and Bernie earlier.

As we were leaving, we realized that we needed a few things for tomorrow and when I checked the internet, I found out that the hardware stores were open until 9 pm but they would be closed for Thanksgiving, so I offered to go pick up the needed items after supper.   We had a very nice Mexican meal and afterwards, Peter and Susan took us to a Mexican restaurant for dessert.  I had a banana chimichanga.   Others had fried ice cream or cheesecake chimichanga.   I left a little  early so that I could get to the hardware store before 9 pm and I arrived back at the site with needed items at 9:30 pm.

I worked on journal for a while after I got back but the internet was so slow that I couldn’t finish it.