We got up  at 6 am, prepared our lunches and ate a hearty breakfast before heading to the job site. It was cool in the morning but it warmed up during the day to about 10 C ( 50 F ).

When we arrived at the site  we unloaded the track hoe and the tool trailer.   Because the bridge was not yet available, we had to drive through a shallow area in the riverbed to get to the other side.

The homeowner, Clinton Nichols had attempted to repair the bridge to his house, however he had an injury and was not able to complete the work.

While the most of the crew started the work on the bridge, Justin and I drove to Charleston to pick up some supplies at four different locations.   It was 1 hour drive to our first stop and by the time we returned to the job site, it was 1 pm.

While we were away, the crew had made good progress on the bridge.  They had added some supports and cleaned most of the steal in preparation for painting.

Justin and Bernie started painting the steel beams for the bridge, however several people helped with the scraping and painting during the day.

And then they helped drive the support posts for the concrete that will be poured at the foot of the bridge alongside the road, while Spencer helped direct traffic.

In late afternoon, Senator Joe Manchin III, ( the former Governor of West Virginia ) came to the site to see what was being done and Peter presented him with an MDS hat that we had all signed.

We even made the channel 13 news in Charleston, WV –

By the end of the day, some supports had been welded to the bottom of the beams and started to prepare forms so that we can pour concrete later in the week.  Also, all of the outside and some of the inside of the beams had been painted. 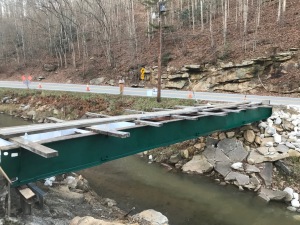 I am happy to report that the only thing that fell into the river was a paint roller.

We returned to the campsite at 5 pm, for a much needed shower, a wonderful meal and some time for rest and relaxation.