A few months ago, I decided to volunteer with Mennonite Disaster Service ( MDS ) during the American Thanksgiving week.   Spencer  Miller, who had joined me twice before and two other young adults Bernhard “Bernie” Pulst and Justin Reimer from Orchard Park Bible Church decided to join me and we opted to go to West Virginia to help build private bridges that were damaged or destroyed by flooding in the recent years.  These bridges are necessary for the homeowners to access the road on the other side of a river.

The temperature was a crisp 2 C (35 F) and overcast when we left Niagara on the Lake at 7 am on Sunday morning and the temperature climbed a few degrees during the day.

We drove to the border and stopped at the “Duty Free” Tim Horton’s for a coffee to bring with us in case we would be held up at the border for an extended period of time.

We were at the border shortly before 8 am and the guard sent us over to the immigration office for document control.   We had no issues at the office and it took only 15 minutes to get clearance before we were on our way, shortly after 8 am.

Our drive was uneventful and we spent our time solving the world’s problems, resolving political issues as well as discussing many unimportant topics.

At noon we decided to stop at Panera Bread for lunch in a small town south of Pittsburgh.   After a nice lunch of soup, sandwiches, chill and posing in front of the store for a picture, we were on our way again.

From left to right: Justin, Spencer and Bernie.

It was 3 more hours driving to get to Clendenin, West Virginia.  Spencer and I continued to discuss various topics and listened to music while Bernie and Justin spend some time inspecting the inside of their eyelids for defects or anomalies.  We had good weather for most of the day however there was a section in the West Virginia mountains where we experienced some wet snow.

We arrived at the MDS site in the abandoned Stillwater Ministries church in Clendenin at 4 pm where we met the site manager, Peter Thiessen and his wife Susan who are from Calgary Alberta.   We conversed with Peter and Susan for a couple of hours before going to Julio’s Mexican Restaurant for supper.   Bernie ordered a meal that had an unusual container consisting of a big cast iron cauldron in the shape of a pig’s head. 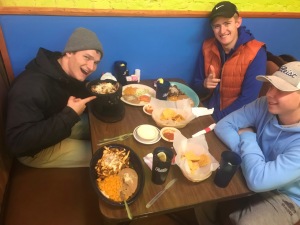 After supper we returned to the MDS site where we met the other volunteers and attended the orientation session.  We were told that would be rebuilding a 53 foot bridge that had been damaged by a flood.   38 private driveway bridges have been built ( or re-built ) by MDS, ranging from 18 to 90 feet in length.

During our conversations, Peter told us a powerful story.   One of the groups had vowed that they would finish the bridge they were working on, before they left on Friday, which they did.   That evening the homeowner suffered a heart attack and they ambulance was able to cross the new bridge to take him to the hospital.  The family attributed the completion of the bridge for the saving of the homeowner’s life.

Below is a picture of the bridge that we will be re-building for a homeowner.

This week should prove to be a very interesting and enjoyable trip for all of us.