We had reserved the Hotel San Lorenz for a couple of days at the end of the trip for rest and reflection from the pilgrimage.

The hotel rooms and meals during our trip have been reasonably priced.   The rooms have cost less than 50 Euro per person per night.   Usually I have paid about 35 Euro and Pete and Kathy have paid about 25 Euro each.   Our main meals have generally cost less than 50 Euro for all three of us.   The Euro is currently equivalent to $1.18 US or $1.47 CAD

Our hotel is very nice.  It is only a few blocks from the entrance to the cathedral, it is spacious, clean and has air conditioning for only 38 Euros ( $55 CAD )/night for a single room.

We had mostly warm, sunny or overcast weather during our pilgrimage, with only one 15 minute of light rain during the 12 days we hiked the trail.  Although Google Maps had suggested a walking route that was 230 km from Porto to Santiago de Compostela, it doesn’t know about the Portuguese Camino Coastal Trail which, as we found out, is much longer.  The official trail length is 280 Km ( 174 miles ) and since we started 5 miles south of Vila de Conde, I calculated that we walked 255 km ( 158 miles ). 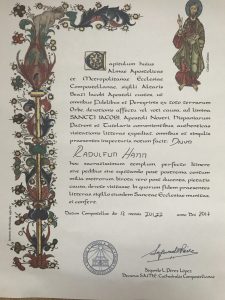 We had a late breakfast at our hotel and went to the Cathedral for the English version of morning mass.  The Priest apologized that his English wasn’t very good but it was, in fact, quite good and his homily was about following all of the arrows in a reference to the pilgrimage and to our personal biblical path.   Judith happened to be at the service and we talked to her for a while before the California tour group arrived and we greeted them.

Afterwards, I went to the train station to get tickets to Lisbon for Saturday, while Pete and Kathy toured the cathedral and visited the crypt of St James below the altar.

I had no luck getting train tickets to go directly to Lisbon.  We would have to switch trains in Vigo and Porto to get to Lisbon plus we wouldn’t get there until the middle of the night.

When we got together for lunch in a cafe near the Cathedral, we decided to take a bus that goes directly from Santiago to Lisbon, which would leave at noon and arrives at 8:40 pm.  We tried to get the tickets online but that resulted in an error with the transaction, so I went to the bus station and got the tickets while Pete and Kathy checked out the area around the Cathedral.

At 4:45 pm, we attended a ‘ Taize ‘ service.  Following the service, we went to a restaurant near the Pilgrim’s office and had a nice meal, after which we went for a short walk past a large convent and many shops in the area.   I forced Pete and Kathy to join me for a Gelato before we returned to the hotel for the evening. 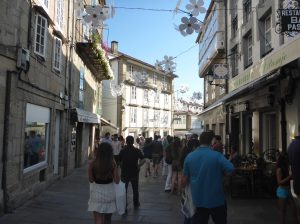 On the way back we saw the German mother and daughter that we had met several times during our pilgrimage.