After the long hike the day before, we were glad to have a shorter 16 km ( 10 mile ) hike to Ancora.

We slept soundly after yesterday’s long walk and had a wonderful leisurely breakfast at one of the many cafes in the area.

By the time we ventured back on the trail it was well after 9 am.

A local woman saw us looking around and directed us to the main hub where the two options for the next section were depicted. As we were heading upward, an English woman saw us and recommended we take the lower beach trail, which is flatter and, according to her, better marked. Apparently she has walked the trail three times, so we decided to take her advice and head down to the ocean.

Kathy was the first one to see the arrow, so she has the privilege of paying for our meals again. I didn’t see the arrow until she pointed it out and even if I had, how could I deprive her of winning the prize. If she keeps this up, this could be a very cheap trip for me.

It was even hotter than the previous day with very little breeze and no clouds. The temperature reached a high of 32C ( 90F ), which made it necessary to hydrate and rest in the shade more frequently. Kathy used her towel to protect her head from the sun during most of the walk.

By mid afternoon we found a wonderful restaurant called Restaurante Marianna, about 6 km south of Ancora, where we had a very good meal. 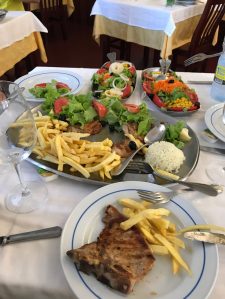 The prices for food in Portugal have been relatively inexpensive.

When we arrived at our hotel in Ancora at 4:30 pm, we noticed that we were very close to the ocean. 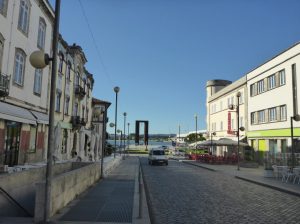 After we checked in, we showered, rested a while and the had a simple meal before going to the waterfront to see the sunset.