Breakfast wasn’t served until 8:30 am and the staff was late, so we didn’t start eating until shortly before 9 am. Andre was going to walk to the central Camino route, so he joined us for breakfast before he left, so we learned a lot about his life in Slovenia.

The streets were mostly deserted when we left at 10 am.

However it didn’t take long for us to reach the city center where there was a flurry of activity. 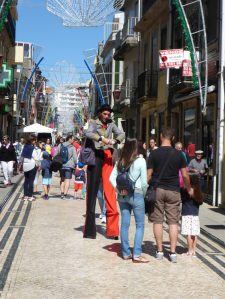 As we marched through the various towns, beaches and countryside we were easily able to find the signs for the coastal Way and we were able to easily stay on the paths, which were marked by the arrows on the streets, buildings, posts, walls , rocks and even trees.

It was a sunny day and the temperature was a comfortable 20 C ( 69 F ), however, it was extremely windy and we had to hold on to our hats to keep them from blowing away.

At one point we saw a rock with an arrow on it where people had piled smaller rocks with their names on them so we did the same thing although we had to use a pen and the writing wasn’t very dark. 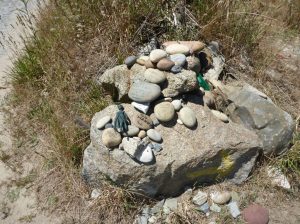 At noon, we stopped for a break at a cafe. 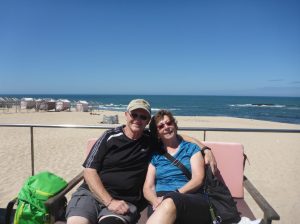 There were boardwalks along the beaches that stretched for miles.

There were also narrow dirt trails as part of the path. 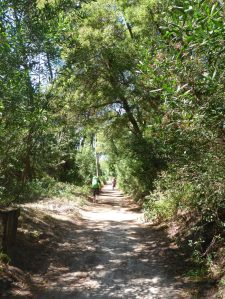 At one point we saw one of the many vegetable fields, but what set this one apart from the rest was the golf course located between it and the ocean. It was the first golf course I had seen since the start of the trip. 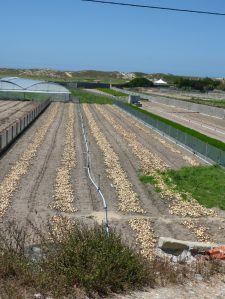 When we arrived at our hotel in Esposende, we had walked approximately 24 km ( 15 miles for my American friends ) in 7 hours while taking several breaks along the way to rest, get our passports stamped, buy some fresh fruit to eat or see some sights. 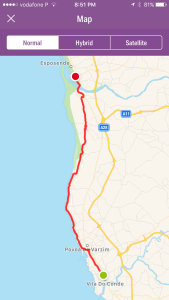 We checked into the Hotel Mira Rio, took well-deserved showers and rested until the restaurant opened at 7 pm where we finished our day by eating a traditional Portuguese meal of marinated, stewed meats.

One thought on “Day 6 – Esposende”