We had experienced another time change following our flight from Lisbon to Tangier and we gained back one of the 5 hours we had lost during our flight to Portugal so that we are now 4 hours earlier than Niagara. I slept soundly due to the lack of sleep from the previous two days, however, I was still a little tired when I got up to join Pete & Kathy for breakfast at 8 am.

We had a wonderful view of the bay and the Straits of Gibraltar from the dining area. 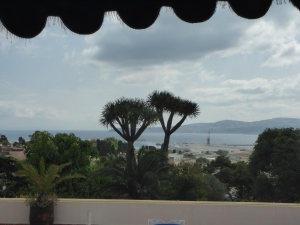 After breakfast we contacted our driver, Achmed, to take us for a tour of Tangier and the surrounding area. We stopped at a location near the waterfront with a wonderful view of the Strait of Gibraltar and I took a picture of Achmed, our guide, with Pete and Kathy. We could barely see the outline of Portugal and Spain as well as Gibraltar through the haze ( on the right side of the picture ), however the camera didn’t pick up the detail. 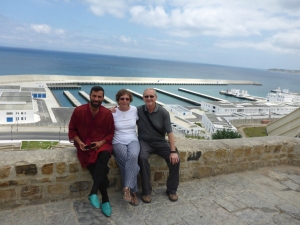 We then drove into town and the Tangier Kasbah. A Kasbah is a fortress with high walls usually without windows. The alleyways between the buildings are quite narrow, as can be seen in the following picture: 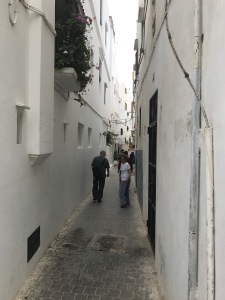 We also saw a riad, which is a traditional Moroccan house or palace with an interior garden or courtyard. 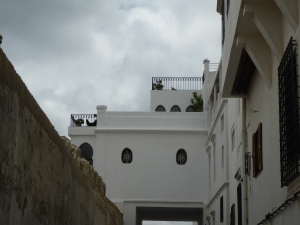 The buildings were interesting and Achmed imparted a lot of historical information regarding the area.

When we left the Kasbah, we drove along the coast past the palaces of the Moroccan king and the Saudi king before arriving at the Caves of Hercules. It is believed that the Phonecians created the sea opening of the Caves of Hercules in the shape of the map of Africa when looked at from the sea. 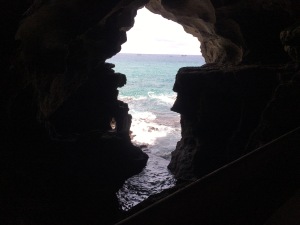 The cave itself is part natural and part man-made. The man made part was used by Berber people to cut stone wheels from the walls, to make millstones, thus expanding the cave considerably. 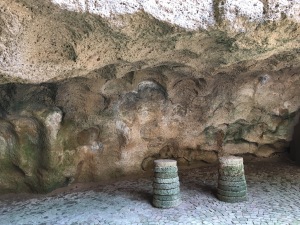 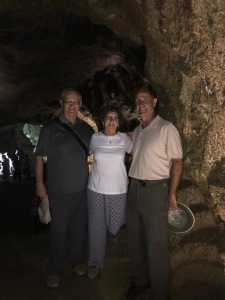 When we left the cave area at 2:30 pm, Achmed took us to a very nice place called the ‘ Ocean Restaurant ‘, where we had a very nice fish dinner. 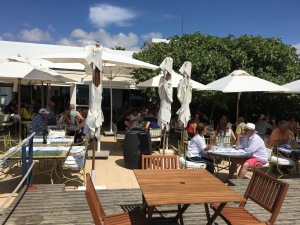 After our meal, we headed back to the hotel and at 8:30 pm we went for a walk around the area. In the evenings the streets are full of people and the street markets are very busy. 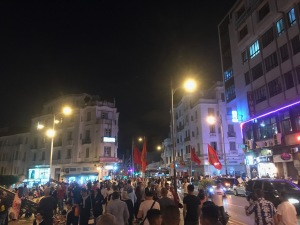