Although it was American Thanksgiving, our day started the same as always, making our lunches, having breakfast and devotions, packing our tools on the truck and heading to the job site at Mary’s house.

Peter and I worked on repairing the roof,

while Gordon and Spencer finished building the frame for the fireplace. 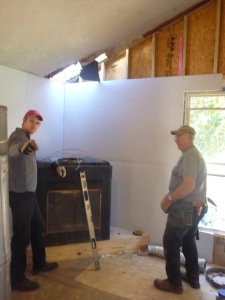 In the afternoon we worked together in order to route the chimney stack through the roof and then re-install the the steel roofing.

By the end of the day Gordon and Spencer had the fireplace installed, just before Mary came home from her Thanksgiving lunch. She was very happy to see that she had her fireplace back because it was one of the few things she wanted to keep. 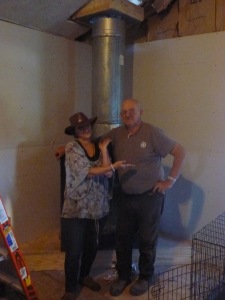 We returned to camp a little early so that we could have Thanksgiving dinner together with the family of one of the flood victims, whose house MDS had repaired a few weeks ago. After an excellent dinner the clients and some of the volunteers played a game of scrabble.

We found out tonight that the large group of Amish men and women from Indiana were not going to be able to come next week because they didn’t have a driver. Bruce asked me Spencer and I if we would be able to stay next week because they would only have 2 short term workers available. I told him that I would see if it would be possible, however, I had made a commitment for Monday back home.