We left Dickson at 7 am and headed south along the highway 40. We stopped for gas and “ brunch “ at 10:30, before continuing our journey. 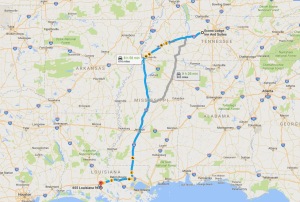 At one point we decided to stop for a break and since we hadn’t seen any signs for a rest stop, I suggested that we just stop at a McDonalds. I mentioned to Spencer that usually when I decide to stop somewhere because I didn’t find a Rest Stop, it was only a few miles down the road. That is exactly what happened to us. When we got back on the highway, we spotted a Rest Stop a few miles from the McDonalds where we had stopped.

Apparently an accident had occurred near Baton Rouge on Highway 10 where we were headed so google maps suggested an alternative route, which we successfully took and it gave us the opportunity to see some of the Louisiana countryside.

As we drove farther south and the weather got warmer, the autumn colours began to disappear and we started to see some palm trees.

We stopped for a bite to eat in Lafayette and we arrived at the campsite shortly after 7 pm. We put our bags into our dorm and then attended orientation. We visited for a little while, before we headed to our rooms for the night.