The day started similarly to the last few days and we were at the new job site by 6:30 am.

It was hot ( 33 C, 91 F ) and very humid again, with the occasional light rain so that our clothes were soaked all day long.

We made good headway on the new roof. 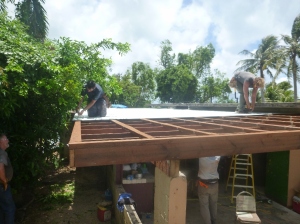 We started enclosing the area underneath the framework but we still have several hours of work to complete the work. 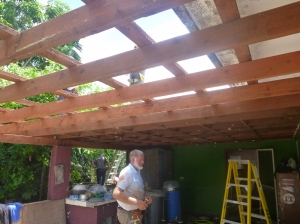 By the end of the day we had the framing finished and the metal on top.

The owners of the house were very hospitable and offered us food and drinks several times during the day. They served us some fried egg sandwiches, as well as fresh, homemade Saipan donuts which were deep-fried balls of flour, egg and vanilla flavouring.

The owners were happy with the progress and commented on how fast we were installing the roof.

When we returned to the campsite, Ed informed us that the inspector had been to Ben’s house and he was impressed at how we had installed the roof and that it had exceeded his expectations.

Shortly after we got back, Micah went golfing at the course next to our campsite, while Don and Blake went snorkeling at the nearby coral beach. I gave Don my underwater camera and he took several pictures of the coral and fish. 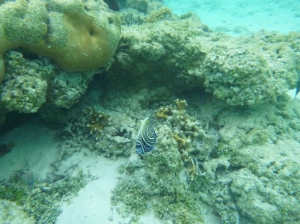 As it is common here, it suddenly rained for a short period of time while Micah was golfing and he got a little wet but it didn’t dampen his spirits.

For supper we went to a nice Chinese restaurant. They seated us in a small room, by ourselves and served us a wonderful meal of different Chinese dishes.

One unique aspect of the island is that most of the speed limits are 35 mph with a few places where it is as high as 45 mph. They have a lot of sports cars, like Cameros and Mustangs for rent but you can’t drive them very fast on the island so people just cruise around with them and some take pictures with them.