We left the site at 6 am after a simple breakfast of cereal and toast and immediately started to work on the roofing job as soon as we got to there.

During our morning break, we enjoyed a fruit tray of pineapple and papaya that the owner, Bonifacio Wabol, ( or Ben as his friends call him), had bought for us. He had also brought us a copy of the local newspaper which featured a nice article on the front page about the efforts of CARE, MDS and World Renew on rebuilding houses on the island. CARE is the group responsible for co-ordinating the efforts of MDS and World Renew by determining the eligibility of jobs and preparing the paperwork required to initiate the work. 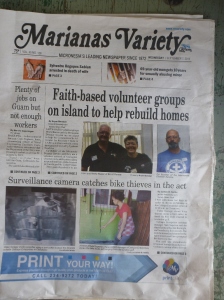 After we got back to work, Micah found my camera and used it to get a picture of me installing hurricane straps and although I typically do not like pictures of myself, I decided to post this one because it shows the rafters and the hurricane straps from below. The roof is not elaborate but it is all they need and they are happy just to keep the rain out. Once the roof is done, Ben can start fixing and cleaning up the inside. While I was talking to him in the afternoon, he told me that he liked the way we built the roof and he is going to build a similar roof on the section that he originally wasn’t going to be rebuilt.

The temperature was in the mid 80’s all day and it rained several times and along with a nice breeze, it made it a little refreshing. However, the rain couldn’t make us any wetter, because we were already very wet from the humidity in the air.

We finished installing all of the hurricane straps and screwed down the metal roofing by 3 pm before we left for the day. Ben was very complimentary and he told us that we were very fast workers and that his neighbors were surprised at how fast the roof was being replaced. 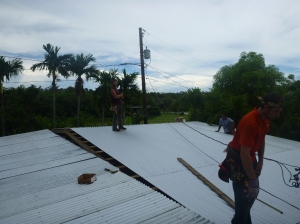 After we had had cleaned up and eaten supper, Jenny, the CARE representative who has been a great help for organizing our accommodations, stopped by for a visit and thanked us for coming to help rebuild the homes on the island. While she was there, she had noticed the beautiful sunset through the window and although the camera didn’t quite capture the beauty we saw, it was still worth taking the picture.