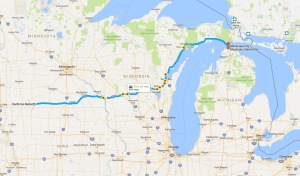 We got up a little earlier to get a head start on our day because it was going to be a travel day and we were only going to stop if we saw something that we wanted to check out.

It was a warm and slightly humid 23 C ( 73 F ) when we left Jackson Minnesota. We drove for several hours before stopping for a quick bite to eat, and then we continued on our way.

We headed east until we almost reached Lake Michigan and then as we went north around Lake Michigan we crossed into the eastern time zone and lost another hour before we crossed the long bridge to Mackinaw, Michigan where we stopped for the night. The KOA office was closed but the manager happened to be there and suggested we pick a site and contact the office in the morning to make our payment. We picked a site with a slightly higher elevation because it had rained before we arrived there and we wanted to have a site that would drain well.

We set up our tents; in the dark, as usual and it wasn’t long before we were asleep.

Tomorrow would be the last 7 hours of our journey home. So far it has been a great adventure for me.

One thought on “Day 13 – Jackson to Mackinaw”