Before we left Missoula, we stopped for breakfast at Paul’s Pancake House for breakfast. It was a popular spot and there was a bit of a lineup even though it was a large restaurant,but it as worth the 15 minute wait.

After breakfast we headed West and then south towards Yellowstone National Park.

When we got close to the park we saw some wonderful views but we could also see several forest fires burning in the park, which created a lot of smoke that we could smell in the car.

When we reached the town of West Yellowstone at the border of the park, I spotted a ” home-made ” ice cream store, which we naturally had to check out. After finishing our well-deserved ice creams, which were very good, we purchased our park ticket an we headed south towards Old Faithful. On the way we stopped to look at some elk, who were grazing on the opposite side of the Madison River that winds through the park. 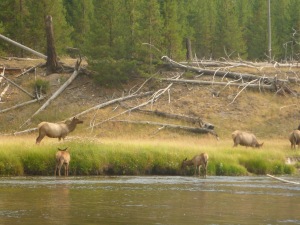 As we got near Old Faithful, we some smaller geysers and the turquoise pools they created.

as well as the pools of algae that were created by the warm water from the geysers. 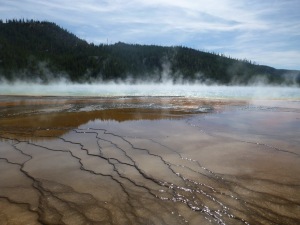 We skipped Old Faithful, deciding to see the next day and opted to head straight to the campgrounds to see if there were any sports available. Just before we reached the campground we saw our first, of many bison that we would see during our stay.

When we arrived at the campground around 5 pm and although it is very large, we were fortunate that there were still 8 spots available. We stood in line, signed in, set up our tents, hung up Spencer’s hammock to some trees and then headed to the nearby village to get something to eat. After we ate, we headed north to see a few more sights before it got dark. We still had enough time to take pictures of the “ canyon “. which had impressed me the last time I was here. When you take a picture of the canyon, it looks like an artist’s rendition of it because of the unusual colours of the rocks. A picture does not do it justice. 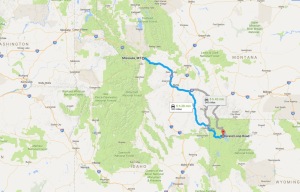