We got up early after a relatively good sleep for some.

After we had packed our lunches, Barbara Johnson, our cook, served us a wonderful breakfast.

The site director reviewed the orientation and then gave us our job assignments. We loaded the trucks and headed to the job sites. First of all, we went to the house were Spencer and Braeden were working under the direction of Mark. 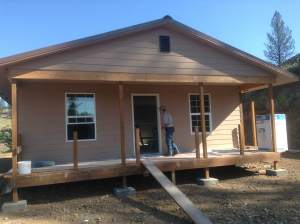 The view was spectacular from where the house was being built. 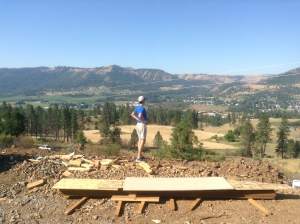 Spencer and Braeden’s job was to ” mud ” the house to get it ready for painting.

The rest of us drove further up the hill to another house and the view was even more spectacular. We worked on siding, putting a ceiling on the porch and some odd jobs that needed to be completed.

The temperature in town was in the mid teens when we got up in the morning but it reached 36 C ( 97 F ) by mid-day. Fortunately we were working up in the mountains and the temperature was a little cooler, but not much.

In the afternoon, the Region IV director showed up with the director of the first response team, to check out the job site and talk to the site director, Clete Yoder.

At 4 pm, we packed up our tools and headed back to camp. We had time to take showers before we had a wonderful meal of marinated pork chops, potatoes, creamed cauliflower, salad and a delicious pineapple/cherry upside down cake with ice cream.

After socializing for a few hours it was time to call it a night.