I woke up on Sunday morning, refreshed and ready to start seeing some of the sights in the area.

I took the shuttle to the airport to pick up my rental car and I met a friend from Michigan, Cheryl Mast and family friend of hers, Sefan, who was now living in San Franciso at the rental car facility at the San Francisco airport. We drove into San Francisco and stopped at a Cafe for breakfast before going to a Mennonite Church for the Sunday morning service.

Big Sur is a section of California Pacific coastline in the Monterey area, about 2.5 hours south of San Francisco. The attraction of this area is the rugged coastline, beaches, sea life and the large Sequoia trees.

We headed south on Highway 101 to Highway 1 the coastal highway until we reached Monterey where we stopped for some lunch. Monterey is a wonderful town and there are a number of things to see and do there. It is the home of the famous Pebble Beach golf course, which we didn’t take time to see. However, we did go to Cannery Row, which is a famous waterfront street of shops and restaurants in Monterey, California. It was originally the location of sardine canning companies until the collapse of its industry in the mid-1950’s and it was made famous by a 1945 John Steinback novel called “Cannery Row”.

The Street followed the ocean coastline and there were some good views at several locations.

A group of kayakers were practicing in the bay in Monterey while we walked along Cannery Row.

After a light lunch at a small cafe, we continued south down the coastline where there were some spectacular views. 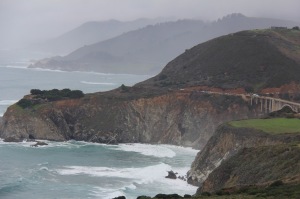 We eventually arrived at the Big Sur area, but unfortunately it was starting to get a bit foggy.

We took a few hikes to the ocean shore. At one location I took this picture of Cheryl and Sefan.

At another hike we came across the location of “The Brown’s Waterfall House “. This is what is left of the original house built in the early 1900’s.

And this is the view from there. 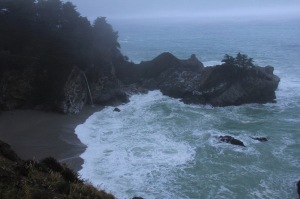 By the time we got to this point it was getting dark as well as foggy, so we headed back on San Francisco.