Driving through the Prairies is very different from the Rockies. Everything is so flat and the roads are so straight that I could tie the steering wheel in one position and fall asleep with classical music playing on the radio and the constant hum of my wheel bearing in the background.

I drove to Drumheller to see the Royal Tyrrell Museum of Palaeontology in Drumheller. I have been there before but the exhibit was even better with the addition of some of the latest finds. I enjoy seeing the exhibition of the dinosaur bones, most of which were found in the foothills of the Rockies near Alberta and BC. 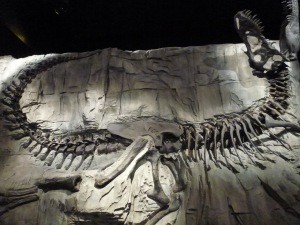 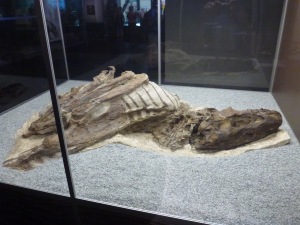 The website ( http://www.tyrrellmuseum.com ) has a good writeup of the museum and the fossils that have been excavated. The museum is located within the Red Deer River valley in the badlands of east-central Alberta, Canada. The badlands have hoodoos similar to the badlands in the U.S.

From Drumheller, I drove to Swift Current in Saskatchewan, which is on the Trans Canada Highway. I have several cousins that live in Swift Current and I wanted to stop by and visit with them because I hadn’t seen them for several years. I called the phone number I had for my cousin Peter Braun and his wife Leona, but it was busy so I decided to go to the address I had listed for them. When I got there, the owner said that they didn’t live there but she got the address for them from the phone book. When I arrived at the door, they were surprised to see me and we spend several hours visiting and catching up on the latest news. When Peter’s brother Jake heard I was there, he dropped by for a visit as well. Peter just turned 90 and he has been married to Leona for 66 years. Peter still helps out on his son’s farm. Peter and Leona are very active in the church and are very involved in music ministry. They sing at churches, events and retirement homes. I took the opportunity to take a picture of Peter, Leona and Jake before I left.

Tomorrow I will try to make it to Winnipeg.