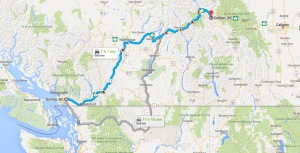 The temperature was quite warm ( 21 C, 70F ) in the morning when I left Surrey, however, it got considerably hotter as I drove east. At one point the temperature reached 37 C ( 99F ).

I left Surrey at 9:30 am and stopped in Langley to attend a church service at the Bethel Mennonite church. On my way, I stopped at a blueberry farm, in order to buy some blueberries for a snack during my trip but they informed me that the smallest amount they sold was a 5 quart basket for $10. 5 quarts was far too much for me because I didn’t have anything to keep them cool and I was afraid that they would just rot in the car. As I was about to leave, the owners, a couple of East Indian men, stopped me and gave me a pint of blueberries. I tried to give them $5 for them but they would not take the money. It was a humbling experience. Below is a picture of the farm where I stopped. 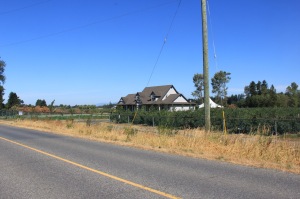 I found that the church service was quite interesting. The message was about dealing with conflict and that sometimes we just need to “ agree to disagree “. After the service, I continued my journey through the Rocky Mountains towards Calgary.

I took a route slightly out of the way, towards Kelowna, which is in the Okanagan Valley. One of my aunts lived there until she passed away and I wanted to see the location of her house. The valley is at an elevation of approximately 400 m ( 1300 ft ) and it generally stays warmer than other areas in the Rocky Mountains. It has very fertile land for growing crops and it has a climate that makes it a popular location for retirees. I stopped for a bite to eat and I noticed that there was a humming noise coming from my wheels. I am familiar with this noise, which is slowly getting louder. It appears that I will have to replace a wheel bearing when I get home.

I was continually impressed by the spectacular views. British Columbia is a large province and everywhere you go you are surrounded by mountains with many diverse landscapes.

The Trans Canada Highway was quite busy at this point and it wound it’s way through the mountains, which made it difficult to stop and take pictures, so I just enjoyed the scenery. The traffic was quite slow because it was mainly 1 lane traffic in each direction and the large trucks had a hard time ascending the mountains.

By 8:30 I was near Golden, BC so I decided to find a campsite there for the night. The view from my campsite was spectacular.

It is a 3 hour drive from Golden to Calgary, where I plan on spending a day to visit with friends and see some of the sights.