I left Watson Lake at 8:00 and headed down the Alaska Highway towards Whitehorse. After a couple of hours an older red BMW car passed me. 20 minutes later I saw it parked on the side of the road and as I drove by I noticed that the hood was up with the young driver looking at the engine. I turned around and asked if he needed help, which he gladly accepted. He informed me that he had just bought the car in Vancouver and he was driving it back to Whitehorse and the radiator had overheated. As he was explaining this to me an older fellow (he was about my age) on a Honda Goldwing from North Dakota stopped to assist. He noticed that the belt for the water pump was very loose. I pulled out my tools from under all of my camping equipment to assist and since the owner of the BMW wasn’t mechanically inclined, we tightened the belt for him. After the owner “ topped up “ the antifreeze, he started the engine again but the antifreeze started to spray out and we could hear an unusual noise. I could see that the pulley was rubbing on something because there were fine metal filings coming from the pulley, but it was hard to see what was causing it to rub. The leak looked like it was coming from the water pump seal so we informed him that he was going to have to get it replaced. A local man with a truck stopped by at this point and offered to give the owner a ride back to Whitehorse, which he accepted.

Since there was nothing more I could do, I continued another 60 km to the next town and had lunch at a very nice restaurant, fittingly called the “ Yukon Restaurant “.

After lunch I topped up my gas and continued my journey to Whitehorse. I arrived at 2:30 pm and checked out a couple of campsites before checking into the Caribou Wolf RV Campsite. This is a very nice campsite. It is clean and it has very nice showers, a laundramat, a car wash, a restaurant and WIFI.

I was warned that there would be lots of mosquitos and other blood-thirsty bugs, but I haven’t noticed many bugs except on my windshield and the front of my car. I haven’t needed to use any bug spray since I left northern Ontario.

After setting up my tent, washing the car ( and almost getting all of the dirt and bugs off ) and taking a shower, I headed into Whitehorse to have dinner with Pat McKenna and her son David. Pat is the sister of one of my co-workers at Oxy Vinyls, Sean McKenna. Pat’s nephew (Sean’s son) Mike, also works with me at Oxy Vinyls. Pat and David live in a beautiful house in a very nice sub-division in Whitehorse.

Pat is a retired school teacher and a marathon paddler. David is a competitive bicyclist. Pat is also a nutrition expert and after a wonderfully nutritional meal, Pat and I went for a hike around the area.

This is a view of the lake that was formed when they built the dam for the Yukon Power station.

The Yukon Power station in Whitehorse is the main supplier of electrical power in the Yukon. There was another smaller station that was built to handle the mining industry, however, mining has decreased significantly over the years and the demand has decreased proportionally. 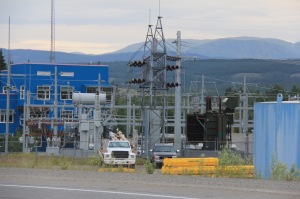 During our hike, we saw this fox near our path and when he saw us he came closer to check us out and was perhaps looking for us to give him some food. 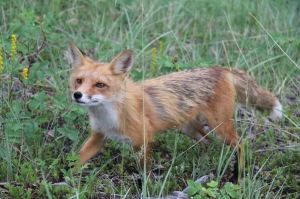 Pat pointed out the wild sage and explained to me that the purple wildflowers that I had seen along the road are called ” Fireweed “, because they flourish for about 3 years after a forest fire. 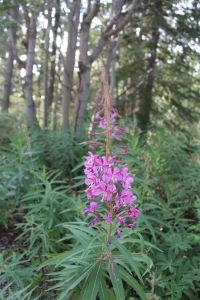 After the hike, we drove to Miles Canyon. The scenery was awesome. I believe that most of the landscape in the Yukon is tree-covered and I imagine that there are many areas that are unexplored because there are few roads in this territory. 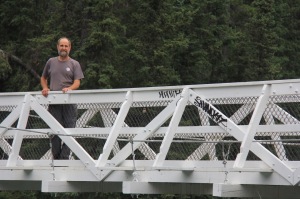 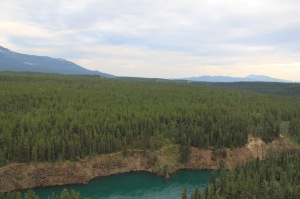 We returned back to Whitehorse and then I headed back to my campsite. On the way I picked up a hitch-hiker and he told me a bit about himself and his family as I drove him back to his reservation. After dropping him off, I returned to the campsite and started to make preparations for my time in the Yukon.

After talking to Pat and a friend of her’s named Richard, I might be changing my original plans for the Yukon so I could be here a little longer than originally planned. You’ll have to stay tuned to see what I actually do.